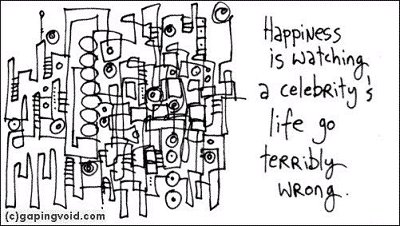 In my last blog post, an interview with Chris Anderson, Editor-in-Chief of Wired Magazine, Chris had a brilliant thought:

“If ever these was a time to be overextended, this is it.”

I agree with him completely. I know what it means to be over-extended all too well. Recently I made a list of all the projects I’m currently working on. The next book. The road trip. The prints. Blogging. Consulting. Drawing cartoons. The list goes on…
All in all, it came down to ten items. Ten. Each one interesting and potentially lucrative enough to be taken on as a full-time job. Ten.
Ouch. Even for me, that seemed like WAY too much.
The other day, a friend of mine was kvetching about having to hold down three jobs. “Three?” I quipped. “Try holding down ten…”
My friend looked at me funny. He was probably right to do so.
Since about 1991, it’s been like that for me. From the moment I woke up till the moment I went to bed, I was working on something. The day job or the cartoons or something else. Sure, I’d have girlfriends come and go, but the girlfriends never lasted too long, and I also ended up inventing, in 1997, an art form that would allow me to carry on working WHEN I was going out to the bars i.e. the “cartoons drawn on the back of business cards”.
I’ve not had a proper vacation in ten years, either. Nor am I planning one.
Call Chris and myself, and probably over 50% of the people who read this blog, members of “The Overextended Class”.
You know who you are. And you know what? In terms of percentage of the population, there were less of us twenty years ago. And there’ll be more of us in two decades.
Our parents and grandparents spent their Cognitive Surplus watching television. That’s a thing of the past… a historical accident of the old factory-worker age meeting the modern mass-media age. Of course it wouldn’t last forever. We humans as a species were designed to compete, not to sit around on our asses.
Welcome to the Overextended Class, People. You may opt out of it if you want, but over time it’s going to get harder and harder to make ends meet, let alone be successful, if you do.
Choices.
[UPDATE: Just added this to “EVIL PLANS”.]