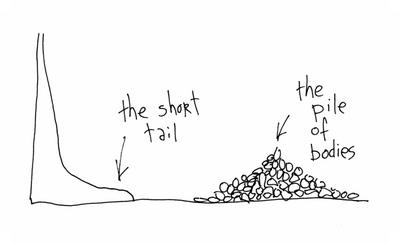 Ten Questions For Chris Anderson
Chris Anderson is the Editor-in-Chief of Wired Magazine, the great tech & culture publication from Conde Nast. He first came to my attention when he published the book, The Long Tail, which talks about Power Laws and the Internet, especially marketing and the possibilities that the Web opens up for everybody. His latest book, “Free”, talks about the new economies of the Internet, where the default price of everything, as he reminds us, is “set at zero”. He kindly allowed me to interview him.
1. First off, let’s plug your latest book, “Free”. Tell us what it’s all about?
It’s about how technology has turned “free” from a marketing trick to
a new economic model. The digital economy is full of paradoxes,
including the big one: it seems that practically everything online is
free and yet we’re told that there is no such thing as a free lunch.
Even more mystifying, jokes like “we lose money on every sale and make
it up on volume” actually describe the business models of such
massively profitable companies as Google.
The book explains the underlying cost economics that allow so much to
be free online, and the business models built around that. It
contrasts 20th Century Free (simple cross-subsidies–you’re paying,
sooner or later) with 21st Century Free (wildly indirect
cross-subsidies–somebody’s paying, but it’s probably not you). And it
focuses on “Freemium” (free+premium), which I think is the first
really new business model of the web and the future of Free online.
2. I think a lot of people have seemed to miss the point of your book, especially people in your business. To me, the point of your book is not about “Free VERSUS Paid”, but a concorde between “Free AND Paid”. As a cartoonist who swings between “Free” and “Paid” quite happily, I don’t see a conflict between the two. Like I said before,

Any profession is in constant, ever-changing negotiation with “Free vs Paid”. When does your lawyer friend offer you free legal advice, and when does he start charging? Ditto with your heart-surgeon pal you play tennis on Tuesdays with. Musicians give their music away for free on MySpace, but charge for the CDs, live gigs and the t-shirts. Petroleum Industry consultants might give 5% of their stuff away for free, just to drum up some new business, but then charge top dollar 95% the rest of the time. In Internet circles, the 95-5% converse is often true. Everyone has their sweet spot. Cartoonists are no different.

In other words, “Free” has always been with us, “Free” is nothing new. So why do you think it’s so hard for people to get their heads around it? Why all the controversy? What are they afraid of?