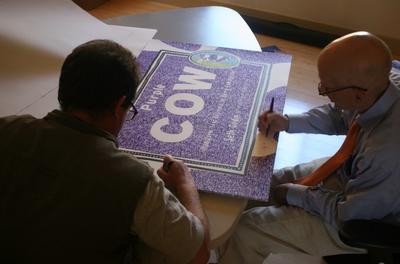 [Me and Seth signing the silkscreen…]
Got back to West Texas last night after almost a week on the road. A quick visit to Silicon Valley for the Techcrunch Party, then an equally brief visit to New York.
I was on the East Coast mostly to co-sign the Purple Cow print with Seth Godin.
That was a great afternoon, visiting his office in Westchester County. He’s a seriously interesting guy. We talked a lot about all sorts of things…
Other highlights were the #NYCtweetup– about 50 people came. Secondly, I got to meet my editing team at Penguin/Portfolio for the first time. They seem very happy with how the book is doing, so it was all good. 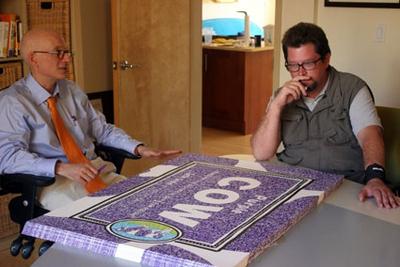 Hugh MacLeod (right) became Internet-famous by drawing cartoons on the back of business cards and publishing them online at his Gaping Void blog. Along the way, he gained some valuable insights into marketing and creativity which he also happily shared with readers; that was enough to attract the attention of the Portfolio imprint at Penguin Group, which recently published MacLeod’s first book, Ignore Everybody.
Now, one of MacLeod’s friends (and inspirations) happens to be Seth Godin—if you’ve been reading GalleyCat long enough, you know we’re right there with him on that—and back in April, MacLeod drew a version of the cover to Godin’s Purple Cow (on a much bigger surface than a business card). “To me the book, as a totem, as an icon, represents a huge shift in thinking that came along, almost uninvited, back in the early 2000’s,” MacLeod emailed Godin shortly after. “The drawing represents [to me] my own ability to internalize it.” By the end of the month, he was taking orders for limited-edition prints which he flew into New York City earlier this week to sign alongside Godin. The pre-order price for the prints was $495, but if you want one now, it’ll set you back $1,100.