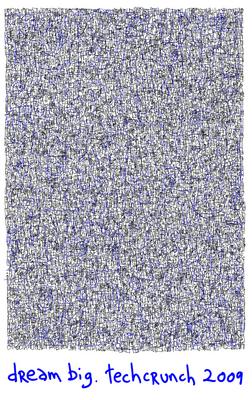 [The Techcrunch 2009 print. Click on image to enlarge etc. To purchase it, go here

[UPDATE: Techcrunch posts a nice round up of the day’s events here. Plus some photos here.]
Yesterday was a long one, but I had a blast just the same…
We headed over for breakfast over at the Little Fox Theater in Redwood City for the first annual Crunchup, organized by the groovy cats at Techcrunch. 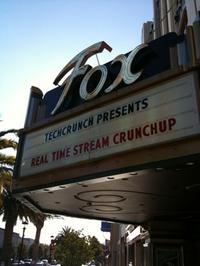 Panels and demo’s, revolving around the theme, “The Live Web”, with Twitter taking the lion’s share of the conversation, which to anyone who knows this space well, would hardly come as a surprise.
It was a lot of fun, tons of people I knew were there, no shortage of interesting conversations etc.
Techcrunch allowed me to fill the lobby with framed prints, which I sold a few of. It was nice to let people see the work in real life, not just online.
At lunchtime Mike Arrington and I auctioned off a large, hand-pulled serigraph of the 2009 Techcrunch party poster, with proceeds going to the Electronic Frontier Foundation. The winning bid was $1000. Wow. Thanks to Bantam Live, Web-based social CRM service, for buying it. Rock on. 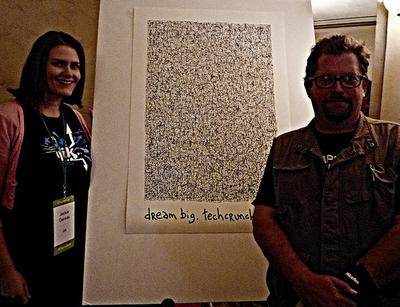 [Me and Jackie Danicki standing in front of the big, auctioned print.]
I asked John Rourke, Bantam’s CEO why he decided to buy the print. To paraphrase, it was for a good cause, he knows and likes my work, and because he was launching his product here at Crunchup, it was a nice “social object” to commemorate a big day for his company.
Thanks, John, that was really kind… 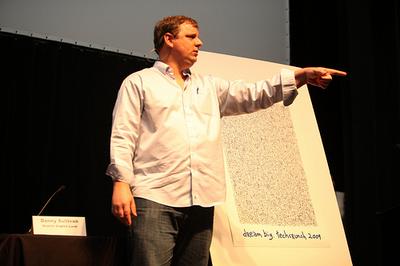 [Mike Arrington and the print, during the auction, saying “Sold!” to John Rourke…] 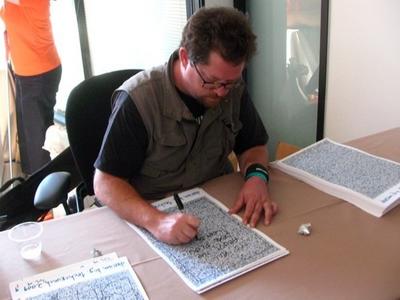 [Signing the smaller 2009 Techcrunch print version, which I handed out at the party..]
Late afternoon we headed over to August Capital on Sandhill Road for the annual Techcrunch Party. Imagine 1,000 super smart, ambitious, relatively young folk in the Silicon Valley startup sector, throwing their business cards around like confetti and you kinda get the idea.
Again, Techcrunch (and August Capital- with special thanks to David Hornick) kindly allowed me to display my prints, so people could get a good look of them. Every print we had on display there, we sold, and more. It was a sell-out show. Wow.
My job for the evening was to sit at a table at the entrance of the event, and sign small commemorative Techcrunch Party prints that I had designed, for anyone who wanted one.
Instead of just adding my signature, I started drawing on them, just making it up as I went along. I must’ve signed at least 300 of them.
It was pretty intense, I have to say. Often the table was surrounded by 12 or 15 people, standing there, waiting for their turn to get something drawn by me. There I was, trying to be “creative” on the hoof. I was on fire.
The party ended at ten pm. I was exhausted. it was a big, but very, very fun day. I slept well last night night, to say the least.
As anyone who knows me will know, I love these kinds of events. Always great to hang out with so many smart, focused, passionate people. Always good to catch up with my old blogging buddies from the old days, like Mike Arrington, Loic Le Meur, Stowe Boyd, Steve Gillmor, Oren Michels and Ross Mayfield.
As an cartoonist who sells most of his work online, in absentia, it’s good for me to get out there and press the flesh- Hey Guys, I’m a real person, the stuff I make is real, and here and now is a great opportunity for me to prove it.
I suppose the most gratifying thing for me was so many people coming up to me and telling me JUST HOW MUCH BETTER the prints look in real life, compared to online. That’s not exactly news to me, but it’s edifying to hear it from other people.
Special Thanks to Heather Harde, CEO of Techcrunch, Mike Arrington and the rest of the team for putting on such a great show. I can’t wait to be back next year!
I’ve just checked out of my hotel room, I’m writing this down in the lobby, I’m now headed for the airport and a couple of days of hustle n’ bustle in New York City. Wish me luck…
[PS. For those of you who asked about buying a large Techcrunch print like the one sold at the auction, we’ll be making them available in a couple of days online. Watch this space etc. Thanks Again…]

Dude, congrats on the sold out prints! Rock fucking on.

Hugh,
It was great to meet with you. Thank you for the cool drawing on the spot.
Have a great week ahead.
Best,
Raj

I was pleasantly surprised to see your stuff at both events. I’ve been following your work since I found you on Twitter a couple of years ago and I love it. You’re incredibly, incredibly talented and it was a pleasure to finally meet you in the flesh as well.

these are awesome grade A!!!

I have to say people very nice drawings! I have always bee jealous of good artists, as I myself can’t draw more than a stick man!

Recommend you hire a photographer and no longer take photos with a cell phone. These are REALLY bad!

Good luck in NYC! Check to see if there any Web 2.0 conferences if you get the chance. They normally run throughout the summer and are great for networking.
-Kye, funnypromos.com