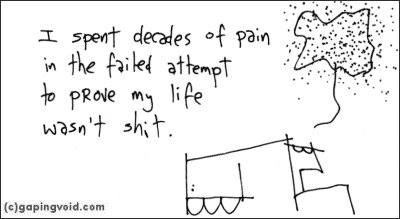 As y’all will already know, June 11th is the date my book, IGNORE EVERYBODY comes out.
It just occurred to me, that date ALSO marks the TWENTY FIFTH anniversary of me starting my first real job- a trainee bartender at Whigham’s Wine Bar, Edinburgh– June 11th, 1984- right after I had finished my final high school exams.
Since then, of course, I’ve had PLENTY of adventures. Attending University in Texas, working offshore in the Gulf of Mexico, working in advertising, working in TV (briefly), starting a greeting card company, drawing cartoons, getting involved with blogs and blog marketing, consulting, making and selling prints, writing a book. A real roller coaster, to say the least.
Twenty five years seems a long time get from where I was then, to where I am now. Had I had my act more together, had I been a bit luckier, had my personality been more suited to some of the paths that I chose for myself, it probably would’ve taken me half the time. I’ve had my fair share of disappointment & disaster along the way, that’s for certain.
But part of me also knows that, had it gone more smoothly, more quickly, I probably wouldn’t have ended up somewhere NEARLY as interesting.
Everybody pays full price for being who they are. Only the interest rate fluctuates.