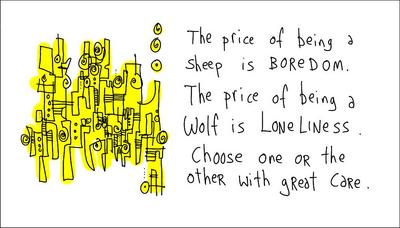 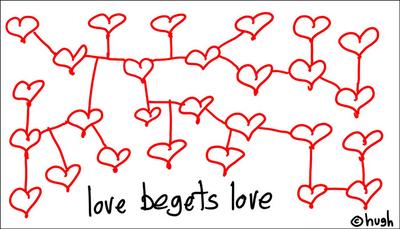 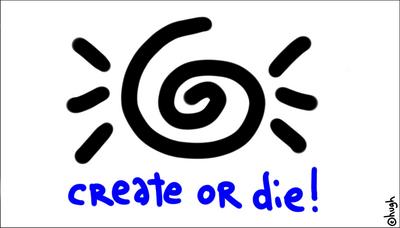 [UPDATE: “Wolf vs Sheep” will be the next gapingvoid print. Details here.]

In case you haven’t been following, I have been updating a few images from my back catalogue [which numbers over 5,000 drawings, the last time I counted] and turning them into limited-edition silkscreens.
It has been a great experience. It’s allowed me to reacquaint myself with the images, that in some cases, I haven’t really thought about for years. It brings back some old memories, and puts my mind to work in a new medium: How to translate 2″ x 3 1/2″ business card-sized doodle into large, 2-or -3-foot images.
As I spend time with this, I can’t help thinking about that age-old, never-quite-answered question, “What is Art?” How is it different, how has our relationship changed with it from even say, a couple of decades ago? Especially with the Internet evolving our sense of “Media” at such a lightning pace?
I don’t have a definitive answer to this, but I do have a few thoughts on the subject:
The artist whose work best summed up for me the Modern, post-World War Two, 20th-Century world that most of us were born into, is the late, great Andy Warhol. A fantastic magazine illustrator in the 1950s, who got into the imagery of televised, mass media in the 1960s. VERY mass-media. Who appropriated the visual language of a mass-produced, top-down, broadcast, CORPORATE world. The visual language of Madison Avenue, the visual language of Kellog’s Corn Flakes, Heinz Ketchup and of course, Campbell’s Soup. And we look at his work with the same sort of detachment as a TV commercial, or a can of beans in the supermarket. And we NEED to remain detached, or else this rather loud, glamorous, oppressive, consumerist worldview would bury us, would turn our brains to corn syrup.
Then along comes the Internet. A place that doesn’t do shotgun-media,”Broadcast” well. A place where if what you’re saying isn’t engaging, isn’t hitting people on a intimate, human level, it doesn’t get seen, it doesn’t get shared, it doesn’t exist.
Which explains why, as a relatively dedicated citizen of the Internet, I am far more interested in what a piece of “Art” can do for you, once it is on your wall, than what I got out of creating it. What it can do as piece of communication between you and the people close to you, not as a piece of academic Art Theory. I like the “Social-bility” of the work. I like creating “Social Objects”. And this to me, of course, is what the Internet also runs on. This, to me, is also what the new internet-enabled, post-TV world is all about. Instant, Human Connection.
And where does this “Human Connection” come from? Easy- from talking about the world you and I actually live in, not the world the “Theory Police” live in. Yes, that one. The messy one. You know EXACTLY what I’m talking about…
And yes, that’s what cartoons have ALWAYS been about to me, long before the Internet was invented, long before I even knew what Art Theory was. As I’m fond of saying, “It isn’t rocket science”. Real, Human Connection never was.
So, with this brave new world in mind, we’re thinking of publishing one of the three following cartoons:
1. “Wolf vs Sheep”. This is a re-working is one of my historical favorites. I first drew it when I had just to moved to New York, in 1998. It was about what I saw as the choices that people are confronted with in the rat race. They were fascinating times and elicited other favorites of mine, like “Company Hierarchy”.
2. “Love Begets Love”. Virgil’s famous quote. I drew the cartoon as a contender for the Stormhoek Valentine’s wine in 2007. It never made it onto the bottle as a label in the end, but a lot of people loved the drawing.
3. “Create Or Die”. Though I only posted this cartoon for the first time a few hours ago, I’ve so far received about 20 emails from people expressing serious interest in it as a print. I never saw that coming, but what the heck, up it goes…
We’ll publish one of the three, depending on the feedback we get. If you have an opinion either way, please feel free to leave a comment below, ping me on Twitter, or if you think you’re in the actual market for buying one, send me an email. Thanks.
The silkscreen print will be roughly the same size [approx 24″ x 35″] and of the same high quality as “Corinthians” and “We Need To Talk”. The price and number of the edition will also be in the same ballpark.
Please let me know your thoughts. All very exciting. Thanks Again.