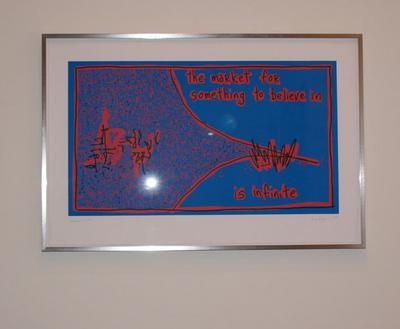 Vinny Warren, a highly respected Creative Director in Chicago [He wrote the Budweiser “Whassup” ad campaign] has kindly hung his new “Bluetrain” print in a key focal point of his agency, the conference room. He blogs about it here.

Fresh from the framing store, it’s one of just 85 signed Hugh MacLeod prints from the first in a series of limited edition prints he’s doing. This was always my favorite cartoon of his. I used to have a b/w printout of it on my office wall. It pretty much sums up how I feel generally. And I love the wildly optimistic yet utterly truthful tone. The text reads: THE MARKET FOR SOMETHING TO BELIEVE IN IS INFINITE.

This advertising connection got me thinking about something I posted back in February, 2004, during the tail end of my own advertising career, called “The Kinetic Quality”:

“The Kinetic Quality”: All products are information. The molecules are secondary.

A good brand is a two-way conversation.
What we bloggers know about the nature of information (a great deal) can be applied far beyond our usual diet of media, politics and journalism. Because all products are information. All products are ideas. The molecules are secondary.

Back when I wrote that, I was an advertising creative i.e. selling other people’s stuff. Now I’m selling my own stuff i.e. my prints. And the same rules still apply:

-By interacting with gapingvoid, Vinny Warren [or whoever] becomes…?

The short answer is, roughly: “Better able to articulate his own worldview to himself and to people around him.”
That’s the idea, at least. Which of course, is THE WHOLE PURPOSE of art in the first place: Self-expression through third-party “Social Objects”.
Anyone who’s ever owned an iPhone or a Harley Davidson will know exactly what I’m talking about…
[Sign up to the gapingvoid “Crazy, Deranged Fools” Newsletter here.]