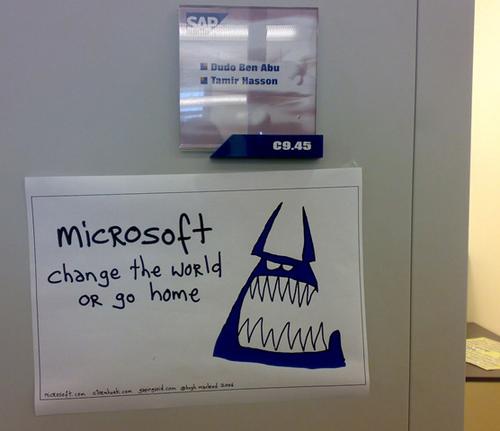 Just stumbled across this photo from July, 2007. The Blue Monster made it to the SAP offices in Ra’anana, Israel. Rock on.
I’ve not been pushing The Blue Monster much in the last year. I’ve been busy with other things, and besides, like Microsoft’s Steve Clayton told me a while back, “It already has a life of its own, so there’s no need to…”
That being said, every now and then I’ll come across someone in the Microsoft ecosystem, either via email, Twitter or in person, who’ll tell me a funny story about it e.g. like how they were in somebody’s office on the other side of the planet, and there they saw it, hanging on the wall. Stuff like that makes my day. And it’s been happening quite a lot recently, for reasons unbeknownst to me. Which I suppose is why I’m writing about it now…
In retrospect, over two years since it made its debut, I’m quite relieved it never got officially sanctioned by the Microsoft marketing machine. “We’re Microsoft! We GET The Blue Monster! We’re cool!!!!” That would’ve gone down like a lead balloon.
My spies tell me that inside Microsoft, The Blue Monster is pretty divisive. Some people really resonate with it, a lot of people go, “Who the hell authorized this?!! This isn’t part of the branding!!!!” I consider them friends of mine, but I don’t work for Microsoft, nor are they currently clients of mine. So I’ll let them sort that one out for themselves. Heh.
I never envisioned it as part of “The Brand”. To me it was just a cartoon that articulated that demonic, creative passion, that sense of PURPOSE that ALL companies need to articulate, Microsoft or otherwise, software or otherwise, if they wish to remain interesting, if they wish to thrive long-term.
It’s not rocket science. Which is why it works.
[Link: The original Blue Monster blog post.]