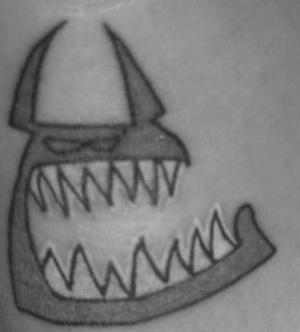 A few people have pinged me about this story over the last couple of days, so I guess a blog post was in order.
A couple of years ago, I drew the Microsoft Blue Monster cartoon. It started taking on a life of its own inside Microsoft.
Then back in July I blogged about how one Microsoft employee, Dan Woodman, liked the idea so much, he went and got himself a Blue Monster Tattoo. As Dan said himself,

While I can never forget how much I love this company and all of the great things we do, I wanted a daily reminder of the fact that I, as a Microsoftie, need to change the world every single day. That is why, as part of MGX this year, I decided to fully embrace the Blue Monster and all it stands for. That is my very own Blue Monster tattoo (and yes, he is real!). He’s there to make sure I don’t forget why I am here and what it is that I am doing — changing the world.

The a couple of days ago the story breaks that Dan has just been laid off from Microsoft. The job is gone, the tattoo remains etc. As the song goes, “Isn’t it ironic”.
Dan talks about here:

One of the questions I have been hearing often involves my very first blog post on this site- “What about the Blue Monster?” The truth is, I haven’t regretted that tattoo since I got it and now is no exception. The Blue Monster is staying. 🙂
Working at Microsoft has been the greatest experience of my life and I have no desire to forget about it. And even if I don’t get back into Microsoft right away (which is, by the way, my plan!), then I have a reminder that even outside of Microsoft, I need to do my best to change the world every single day.

So being the cartoonist who spawned the Blue Monster, how do I feel about it?
Well, I don’t know Dan personally, but at the time I considered it a great honor that he would regard my work highly enough to tattoo himself with it, even if I would never be totally comfortable with that kind of responsibility. But I guess that’s the price you pay for putting your work out there. It’s like being a songwriter, and then reading in the national media that some teenager in Iowa killed himself while listening to your album. That doesn’t make you an accessory to murder. Art has a life of its own.
And yeah, getting laid off is always a risk, with or without a company tattoo to call your own. Welcome to reality.
Secondly, just because Dan doesn’t work for Microsoft Corp any more, doesn’t mean he’s no longer part of the grander cause he signed up for, for the kind of change he wants to help make. Microsoft is a huge company, but it’s dwarfed in comparison by the size of their Partner Group ecosystem. I imagine Dan could easily end up somewhere in there, working away quite happily and productively for the same cause.
And why not? I have a friend who was laid off from Microsoft last year, and guess what? She still drives to the Redmond campus every day. Only this time she’s the employee of an outside contractor, not Microsoft, but the type of work that she’s doing, and the people she’s working with inside Microsoft, really hasn’t changed too much. The lines that separate “internal” and “external” are very blurry, compared to even half a generation ago.
Thirdly, the Blue Monster was never about Dan’s paycheck. It was about an idea. I’ve been saying this for years: All a product is, all a company is, is an an “Idea Amplifier”. Products don’t excite us. Human potential excites us.
i.e. “People matter. Objects don’t.”
Good luck to you, Dan. Good luck with your next adventure, and good luck with your new blog. Rock. On. And Thanks!

The thing is, it’s our own human potential that excites us. Potential in others only excites us when we can internally transfer that to us. Often times that’s through a product. We see a product making someone else kickass and we want to kickass too.
So, yes people matter, but perhaps really only when they matter to us. Otherwise they get flattened due to lack of substantive attention into the Microsoft tattoo guy.
Peace.

I’ve been thinking about getting a tattoo based on a design of yours. I just can’t decide which one I like best. I’ll keep you posted 🙂

There is something faintly ridiculous about someone getting a tat that reflect their professed love of the company that pays their salary. i2 offered a bounty for peeps to get their logo tatted up – then changed the logo. I mean – c’mon, it’s fskin’ retarded.

It’s pretty small minded of some to think that the Blue Monster tattoo is bogus now that he has a world of fresh opportunity to focus on.
A desire to have an impact on the world does not have to exist within the context of a corporation. Hopefully Dan can take that passion and focus it in new ways that don’t involve getting a MS paystub on the 1st and 15th.

Thanks, Hugh. It’s amazing to me how many people are discussing this story. It’s even more amazing to me how people I have never met have such a strong opinion of me (one way or another), as I have learned through some other blog comments. You and Tex1Sam have pretty much hit it on the head — it isn’t about Microsoft. If it had been about Microsoft, I’d have the MS logo tattooed on my body. Honestly, I considered it, but clearly didn’t do it. It wasn’t what I wanted. When I saw the Blue Monster and the story that went with it, I realized that it was exactly what I had been looking for. It was about Microsoft, but wasn’t Microsoft. It had (and continues to have) a deeper meaning than simply “I love Microsoft.”

@Daniel Edlen – Totally disagree with you there re human potential. Some of us are driven by helping others reach or approach their potential. It’s certainly my passion.

Back @Allison Reynolds – You’ve made people’s realized potential your product, so yes, they matter to you. I’m not saying this cynically, or to put down helping others, it’s just that you get to kickass by doing so. It’s your passion, your focus, how you’re taking over the world. You.
Peace.

Thank god for the few Dennis Howlett’s out there; tattooing yourself with an icon of the company you work for is the height of intellectual lameness. These are the same people who will tear-up at company retreats while making references to giving “110%.”
As much as that kind of soul-murdering bs sickens me from personal experience, it’s not half as lame as the attempt by others to kite this episode into a haiku about MAN’S ULTIMATE PLACE IN THE UNIVERSE.
Listen up: the guy sells his labor for a wage. Sentimentalizes the relationship in a way that suits the company. When the company decides it can’t carry him, it cuts the umbilical without a second thought. ABCs of capitalism.
It’s the height of dishonesty to then say, “Well, it wasn’t ever about Microsoft. It really is about the ability of the individual to forge ahead, to dream the impossible dream, to run where the brave dare not go, to right the unrightable wrong.”
The idea that people work at Microsoft to change the world – a company that’s renown for the mediocrity of its products, the rapaciousness of its monopolistic practices, its eagerness to work with the military, with dictatorships, with anyone that will cough up the cash – is just mendacious crap.
That fact that those kinds of claims constantly get floated on this site to choruses of “Here! Here!” is why sooner or later this blog always ends up in the same ideological space as log cabin Republicans.
So, yeah, the episode does have a deeper meaning: wake up, and don’t be a stooge.

@ no thanks. Nice rant, but your self-imposed limitations are not mine, Dan’s or Microsoft’s problem.

At least it’s not just the blue meanie. This guy got a WordPress tattoo.
It may have changed his life, but now it’s changed his body.

[…] Today found this great post, here is a quick excerpt : A few people have pinged me about this story over the last couple of days, so I guess a blog post was in order. A couple of years ago, I drew the Microsoft. Read the rest of this great post Here […]

One day at a time dvd

One day at a time dvd