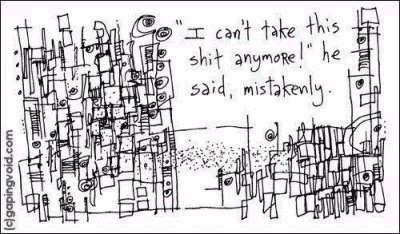 [“Mistakenly”, one of my all-time favorite cartoons, is appearing in my upcoming book etc.]
A few days ago, during my “Ten Questions With Mark O’Donnell”, we mentioned briefly his stint back at college, working at the great college humor paper, The Harvard Lampoon.
Soon after, my mother sent me the following email:

Don’t forget that your grandfather was also a member of the Harvard Lampoon in the ’30s.
Their humor was probably a little different- it was an innocent time.
One project which Grampa and his friends carried off with aplomb – in order to write about it later in the Lampoon – was to ‘kidnap’ the Sacred Cod of Massachusetts– still there, by the way. They smuggled it out of the Mass. State House in a coffin, well-covered in lilies. In the days of Mayor Curley, no policeman would have done anything but bow his head with a reverential murmur. It also tells you something about the reign of Mayor Curley, that he set a ransom of a pint of beer and paid up to get the fish back.
As I said, it still hangs there today.
2nd after dinner story: To sell papers – it was the depression, remember – they kidnapped (the “K” word again?) – the Yale Bulldog – yes – a live dog – and took it home to Cambridge where they kept it (him) happy on a diet of hamburger and French fries. Before they gave it back in time for the 1933 Harvard-Yale game, they put his dinner on the foot of John Harvard’s statue- still there, in Harvard Yard – and photographed the good dog licking the foot of John Harvard. Needless to say, the pictures of the dog’s dinner greeted the Yalies when they arrived for the game. Sold a fair few Lampoons, too.
Love from your mother

Heh. I remember hearing those stories about Grandpa, growing up. I’d forgotten he was was with The Lampoon when he did it, though… Thanks, Mom! Rock on.