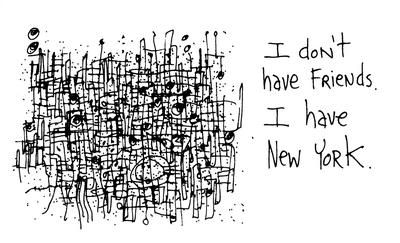 GETTING OVER HOMER was my personal working-through-heartbreak novel. LET NOTHING YOU DISMAY is sheer imaginative speculation: the hero is five two, and I’m six two in height. I got the idea one Christmas season, when I went to two radically different parties in one day — an off-Broadway theatre’s, which had potato chips and wine in a box, and FORBES Magazine’s party, which had a live orchestra, tuxedoed waiters with hot hors d’oeuvres, and a glittering buffet. I thought you could paint a picture of all mankind in just a few strokes if you did it right. Also, the main character, because he’s short, aspires to higher things.
6. I remember meeting your twin brother, Steve, when he came up to the summer camp in New Hampshire to visit you for a few days. I remember seeing him wearing a tweed jacket, tie and slacks, and thinking, “Why is Mark all dressed up?” You guys were extremely identical in the twin department. And then yes, soon after you both graduated from Harvard and got jobs writing funny stuff for a living. Steve had his first big break writing for David Letterman [before that he wrote funny lines for a greeting card company]. Though you both have had nothing but love and mutual respect for each other over the years, your career took longer than Steve’s to reach the big time. Was that difficult for you, or did it not really matter?
We’ve never been competitors, we’re colleagues. His success is mine and vice versa. Does one doctor resent it when another doctor saves a life? Actually, it’s been up and down for us both, so no one’s ever “ahead.” We each believe in the other’s funniness, so the outside world’s response is beside the point.
7. Your humor, cartoons, and poetry have appeared in The New Yorker, Spy, Atlantic Monthly, the New York Times Magazine, you’ve published books, and your plays have been produced both on and off Broadway. I know you had a brief stint writing TV for Saturday Night Live, but if I were to sum up your oeuvre in three words, it would be “The Printed Page”. Your bother, however, opted for television, not just with Letterman, but also folk like Chris Rock and Seinfeld. I’m guessing you’re talented enough to have also gone down that road, had it appealed to you. But I’m guessing it didn’t. Thoughts?
I did write for SATURDAY NIGHT LIVE, and wrote assorted scripts that never got made. I’m a bit more bookish, I guess. Steve has thrived in TV, whereas I preferred books and plays. I joke that he’s the world’s most artistic comic and I’m the world’s most comic artist.
8. Wen you first started getting your name around New York, the world wide web didn’t exist. And now it does, very much so. Has the web affected your career? Has it made it harder? Easier? How has the world changed, from the perspective of the industry you’re in?
I’m techno-tarded, so the Web or whatever hardly affects me. The HAIRSPRAY screenplay had to be filed as an online attached document, that was, to me, a challenge. I expect I’ll have to handle it eventually.
9. This story really tickled me: After the success of Hairspray, you’re were working on a new John Waters musical, “CryBaby”, based on his film. A few months ago I sent you a note, telling you about how my “How To Be Creative” manifesto was going to be published as a book. I had no idea if you had yet come across it, at that point. And you wrote back, “One of our actors was browsing your website as we rehearsed CRYBABY, and was impressed I knew you. Qui peut savoir?” It seems to me, that when something you make gets successful [My most conservative estimate of how many people have read HTBC so far: Two million], it really takes on a life of its own. The author pretty much ceases to matter. You’ve got the author, you’ve got the piece of work, and suddenly you’ve got his THIRD THING that the work becomes, after it’s been seen and digested by enough people. Since Hairspray’s success, have you noticed this phenomenon?
Well, there’s a lot of HAIRSPRAY merchandise — Bloomingdale’s even did a fashion line — and high school kids everywhhere sing the score, but it was a collaboration between six people, and John Waters is the ultimate progenitor. I don’t take it personally, as you can with your strip. It’s how people introduce me now, though.

10. As your long-time fanboy, it’s really gratifying for me to see your work FINALLY getting the recognition it deserves. But as we both learned the hard way, “It don’t come easy”. Knowing what you know now, what advice would you have given yourself, years ago, when you first moved to New York as a young, aspiring writer just out of college?
Basically, don’t look down. I didn’t realize that the odds are against the struggling artist, but I assume talent, patience and work will vindicate those meant for whatever the dream may be.
And, as Yeats suggests, “Be secret and exult.” Take joy in what you do, even if as yet it goes unseen.
[The “Ten Questions” series archive is here.]