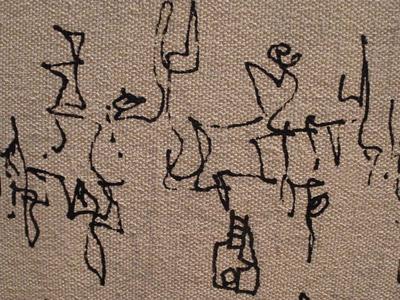 [Close-up of “DesertManhattan”. Click on image to enlarge etc.]
1. I started DesertManhattan in September [See initial post here]. I thought it would take me a couple of weeks. Now I’m thinking, if I get it done within six months, that’ll be pretty good going.
2. I don’t work on it that much. Maybe twice a week for a couple of hours. Usually I enter the studio when I’m feeling a bit overwhelmed by other stuff. It serves as some sort of refuge for me, when I don’t want the other stuff to matter, at least for a while.
3. I’m in no hurry to get it finished. Maybe I’ll work on it for a couple of years. Maybe I’ll never finish it, but just keep on working on it forever- like a blog, a work in progress, a never-ending story. Just an idea.
4. DesertManahattan is not a work of art. It’s a cartoon. I’m not an artist. I’m a cartoonist. To me, the distinction is important.
5. I might sell DesertManahattan. I probably won’t. At least, not yet.
6. I like the Build-it-slowly-but-obsessively approach. It’s not the only way I like to work, but it certainly has its place.
7. Yes.

This is a video of one of my Moleskine drawings, currently hanging on the wall at gapingvoid Central. I don’t make too many of the …

[Moleskine drawing from 2009: “Tried Meaningful”. You can see the enlarged image here. See more like this over at the Moleskine archive etc.] “Ideas that …

This one is called “The Intense Longing”. The latest from the “Moleskine” series [Click here to enlarge etc]. Friday night I was in Marfa, hearing …