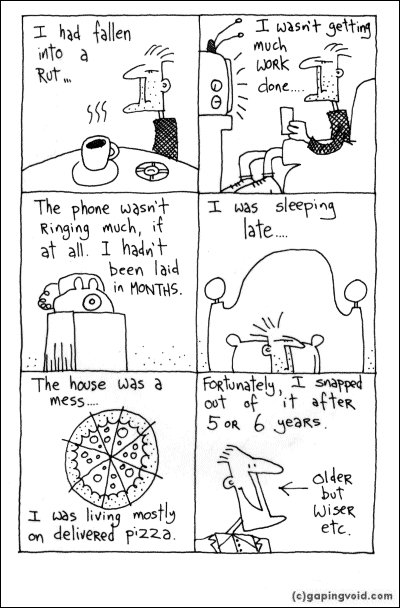 [A cartoon I drew back in the mid-1990’s…]
1. January 18th. El Paso, Texas. 11am.
I’m headed for Sao Paulo, Brazil.
Drove from Alpine, Texas to El Paso last night. Spent the night in the airport Holiday Inn. Ate dinner at Rudy’s with Loren Feldman, who was in Alpine doing some video work with me. Plane leaves mid-afternoon.
2. Update: January 19th, Sao Paulo, Brazil. 6.30pm. Just got done giving a talk on “Social Objects” to some groovy cats at Citicorp Brazil. 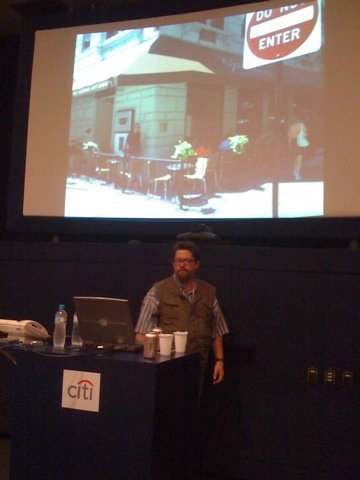 This is my first visit to South America. Sao Paulo is the 4th largest city in the world, I am told. 18 million people or so. Kinda reminds me of a cross between Paris, Miami and LA, if you can imagine that.
Jetlag hasn’t been too bad. Slept a few hours earlier this afternoon. Giving a talk in front of 600 advertising & media types tomorrow. I’ve never been so well looked after on one of my foreign visits, before.
3. Update: January 19th.

Three days ago I signed off on the first “Bluetrain” prints. Loren Feldman was in Alpine at the time and filmed it. He writes about it and posts the video here. Thanks for the kind words, Loren. right back at’cha.
4. Update: January 19th, 11.30 pm. Sao Paulo, Brazil.
I’m back at the hotel. There’s some big party going on, by I opted for an early night instead.
Just got back from dinner with @jeffpaiva and his colleagues i.e the groovy cats who paid to fly me, business-class, out here.
We talked about the usual “where-advertising-meets-social-media” schpiel. To be honest, I don’t have any really huge insights you’ve not already heard before. As always, the hard part is not conceptual; the hard part is execution. You can riff on about “social objects” all you want; but unless you have a real live one you can play with, it’s all just a lot of useless theory.
The Brazilian advertising/marketing scene has the same problem as a lot of countries- a very out-there progressive creative community, juxtaposed against a very conservative business culture. That being said, with the rate that the Brazilian economy is growing, business will have to change, just in order to keep up.
The world has changed, and every year it gets more expensive to keep pretending that it hasn’t.
Update: Slightly Later.
One theme that kept on coming up over dinner: One unseen result of electing to take myself out of the marketing/social-media/consultant scene last year in order to concentrate more on my drawing is- it actually seems to have made my advice on the former far more valuable? Why? Because I’m not just ONE MORE consultant looking for a new corporate gig. I’m already busy doing other, unrelated stuff. As I’m fond of saying, the best way to get approval is not to need it.
This got me thinking about the “Hammer” post I wrote a few years ago.

Blogs are like hammers. They are tools for building stuff.
When you talk about building a house with a carpenter, you don’t mind him talking about his hammer for a while. Nobody minds indulging a craftsman, within reason.
“This hammer is great for this,” he’ll gush. “This hammer is great for that…”
So you think yes, hammers are good things, and indeed his hammer looks like a particularly fine example.
But eventually you’re going to interrupt his joyous ode to hammers. After a couple of minutes you’re going to abruptly change the subject:
“Cool. Now let’s talk about the ACTUAL HOUSE you’re going to build for me…”
And if the carpenter is any good, he won’t have any problem with that.

We live in interesting times…
4. Update: January 20th, 10.15am. Sao Paulo, Brazil.
Weird bit of live blogging going on right now. I´m at some Brazilian magazine being interviewed. They´ve asked me to blog something, while they film me on video camera for some TV show. So as I write this, I´m in the magazine office being filmed, with all these media and PR types standing in a circle around me, watching. All kinda surreal, but in a good way…
5. Update: 12.30pm.
Just arrived at Campus Party Brazil. 6,000 people, average age: 21. Vast seas of computer tables everywhere. My talk is at 2pm. My talk is going to be mostly about “Creativity”, with a bit of Social Object Theory and marketing 2.0 schpiel thrown in for good measure.
6. Update: 23rd January. Alpine, Texas.
Got home yesterday after a nine-hour flight Sao Paulo-DFW, then a connecting flight to El Paso. Great to be back in Texas again.
The talk at Party campus went well. That day I also did a ton of interviews for the Brazilian media. In the evening I attended a fabulous geek dinner with some of the Brazilian 2.0 peeps, a regular event they call “Nerds on Beer”.
I came away from Brazil thinking, “Man, there’s a lot of opportunity here.” One part of me is too tired and jet-lagged to think too hard about it. Another part of me sees a very dynamic country of a few hundred million people, with an economy growing at 10% per year. And I have a few ideas about what to do about it.
Thanks, Jeff, for bringing me out there. Hope I can get back there soon. I had a hell of a time.

[The Rothko Chapel, photo courtesy of Arch Daily] Long before I acquired even the faintest interest in modern art, I was down visiting my dad …

[That’s me in the armchair with the laptop, looking very serious etc.] Thanks to Piers at PSFK for allowing me to speak at yesterday’s PSFK …

[This is my semi-monthly shameless pimpage of LightsJerky.com, for which I have no stake in, nor do I receive any compensation for it. I just …