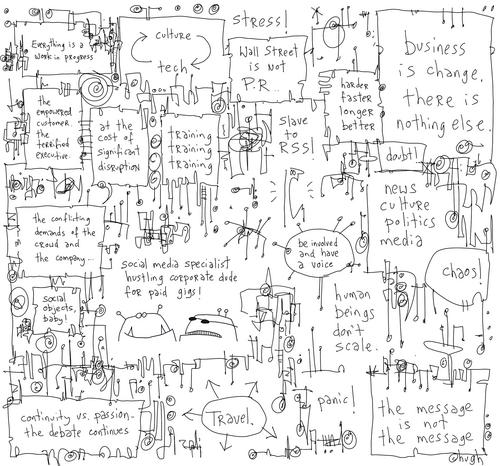 [Click on image to enlarge etc.]
A few weeks ago my buddy over at Edelman Europe, David Brain commissioned me to draw a PR-related cartoon for an ad they were running. Though like all commercial illustration gigs, there were a few changes made in the end, I liked my first offering so much I decided to just go ahead and blog it here.
There are some new ideas in there, and some old ones I borrowed from my attic, most notably our friend, the ever-cheerful and optimistic Social Media Specialist. A lot of the ideas were inspired by the interview I did with David back in early November.
Considering how tight the deadline was at the time, the project turned out rather well. I was happy, so was David. Hopefully Richard Edelman was, too. Rock on.