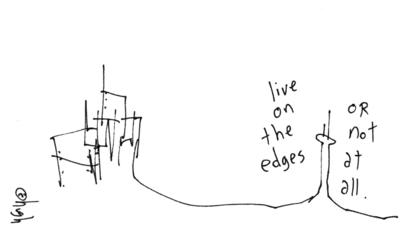 [“Edges 7”. Part of The Edges Series. Click on image to enlarge etc.]
My buddy over at Dell, Richard Binhammer left me some food for thought in the comments section of my latest Dell-related blog post. Worth checking out.
Richard points out that yes, although Dell is best known for its “Efficiencies” i.e lowering the cost of making and selling computers to people, he personally thinks there’s another primary drive of Dell which he feels often gets overlooked: “Getting closer to the customer”.

That direct connection with customers contributed to the impetus for much our involvement with blogs, Ideastorm, Twitter…and so much more.

Well, as we all know, human beings don’t scale. Micahel Dell can’t have a friendly game of golf with EVERY PERSON who wants to buy a $450 laptop. Maybe if your company is buying 25,000 servers off him globally next year, he’ll free some time up in his diary, but…
Doc Searls brilliantly quipped in the Cluetrain, “Markets are Conversations”. But markets are also about getting stuff done. Often by lots of people at the same time. In the real world. Harder than it looks.
I take Doc’s use of “Conversation” primarily as a metaphor. Take it too literally and the metaphor starts losing its power. Religious metaphors often run up against the same problem: Virgins have babies, really? Gosh, I did not know that! Wow, dead people rising from the grave after three days? Cool, where can I get some?
That being said, for large companies like Dell there is a sweet spot in here somewhere- a place that allows your company to “converse” like a human being, that lets you [within reason] get closer to the customer, while still allowing you to scale. It’s devilishly hard to get there, though. If it were easy, case studies wouldn’t be so thin on the ground as they currently are.
The good news is [and from my first-hand observation, Dell have also found this to be the case], that “Marketingspeak” doesn’t work very well on the internet. That acting like a drone doesn’t work very well, either. That human beings respond far better to other human beings on the internet, than they do to faceless, corporate spokesmen. And as more and more of large businesses’ communication moves to direct, two-way online conversations with their their end-users, companies will have no choice BUT to act increasingly human.
And this increasingly human voice won’t just affect the marketing, it’ll affect the entire organization. For the better, I believe.
Sure, corporate conversation may never scale to the level of intimacy some of my crazier blogger friends hope to live to see. That being said, today there’s still a tremendously large opportunity for the people who can lead the way, who can, like the cartoon above implies, keep pushing the edges. That’s why Dell interests me. Same with Microsoft. As far as big companies are concerned, in this department, they’re leading the pack.
[Afterthought:] None of this is anything new to those who read the Cluetrain in the early days, of course. What pleases me is, how Cluetrain is gradually being proved right over time. And I remember vividly how, in our hearts, we all wanted it so BADLY to be right, even if proof was somewhat lacking, all those years ago.
[Bonus Link: My old advertising buddy, David Carlson, who now lives out in Vietnam, writes an interesting and upbeat blog post about attending Barcamp Saigon.]