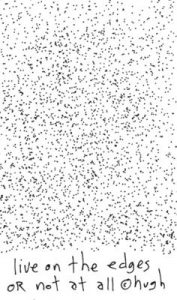 I’ve spent a lot of time in the last few days thinking about Dell Computers, a tech hardware company from Round Rock, Texas. Here are some notes:

1. When I developed The Blue Monster idea for Microsoft, a wee voice told me there was a business model in there somewhere. Some kind of post-advertising, Purpose-Idea, social-object, marketing-disruption kind of thing. Something that would scale, something one could turn into a little cottage industry, creating TONS of value for the fraction of the cost of the traditional advertising agency model. Dell liked the idea, and let me have a meeting with them. Since then I’ve been having this little back-and-forth with them, trying to get know the company better, trying to figure out an “Angle of Alignment” with them that would hopefully allow me to create something interesting.

2. So far it’s been a great experience. Working mostly with Richard and Lionel, they’ve been introducing me to tons of people, while I’ve been trying to get my head around the company- what they do and why they do it.

3.Though I find it a bit simplistic [nor do I agree with much of it], I love this article from Fake Steve Jobs, “Why Dell Won’t Bounce Back”

Bottom line is this: the only innovations worth making are the ones involving product ideas and product design. I mean, Duh. Right? It’s pretty obvious. What’s amazing to me is how few companies actually seem to realize it. To sustain an edge in any market you must make better products than your competitors, consistently, over and over and over again. Just making the same products as everyone else but taking a little friction out of the system can give you an advantage, but only a temporary one.

The article basically lines up all the most obvious challenges Dell faces. Like I said a while ago, I see Dell’s challenges fall into four main categories:

i. Evolution of customer service. Sure, they have a ways to go. Then again, don’t we all etc. They’ve certainly come a long way since Jeff Jarvis and the whole “Dell Hell” episode, which gives me reasons to be cheerful.

ii. Design. Ten years ago, I didn’t own a computer. I really didn’t. The company I worked for gave me one- a Mac desktop. The internet was still relatively still in its infancy back then, so besides using Word to do my job, sending emails, and surfing the net occasionally, I didn’t really have a lot of use for it. Now I can’t imagine life without my laptop.
To use a Real Estate allegory: When your company sets you up with a temporary accommodation in a new town, you don’t really mind too much that it’s Embassy Suites. It serves a function. But let’s say you’re looking for a new house for you and your spouse and young children to move into, your needs become A LOT more exacting. Not to mention, a lot more expensive in terms of both square footage and decor. There’s a reason why commercial real estate tends to be cheaper than residential etc.
More and more people are using their own computers to do their work. Their “Own Homes” for their data, as it were. Dell has long been been in the “Temporary Accommodation” business, for other people’s data. And now as the market changes, they’re having to make the move from building “Embassy Suites”, to building actual “Private Dwellings”. There’s a contextual headshift to work through. And it won’t happen overnight- it’s a big company.

iii. India & China. In 2007 for the first time, Dell made more money from outside the USA than from inside it. 50.2% vs 49.8%, I believe are the figures. The question is not about how one get more business from the West Coast, Mac-using hipster crowd. The big question is, how do you get technology into the hands of people who THIS SIMPLY WOULD NOT HAVE BEEN AN OPTION FOR, even a couple of years ago?

iv. Culture. To me this is the biggest issue of the four. You can’t thrill your customers until you thrill yourself first. Let’s face it, a big part of the Dell schtick is built around processes- sales, manufacturing, controlling costs and all that lovely, corporate back-office stuff. That’s fair enough, most big companies operate like this. I would very much like to know, what percentage of Dell employees feel “This is just a paycheck”, versus how many feel, “Dammit, we’re frickin’ changing the world here”…?

4. Somebody at Dell once described his employer as “Ordinary people doing extraordinary things.” Though my granny always told me that it’s good to remain humble, and to a large extent, I do agree with that sentiment, I did scratch my head a wee bit at that one. Does Microsoft see themselves as “ordinary”? Does Apple? I doubt that they do.

5. Though it’s still early days, I think Michael Dell coming back from retirement to captain the company [like Steve Jobs did at Apple] is a big deal. I think the effects are only just beginning to show themselves. Personally, I’m glad to have him there.

6. Part of my motivation for working with Dell is simple patriotism. For 20 million Texans to prosper long-term, we need large, world-class creative powerhouses. Same as every other state in the Union, same with every other nation on Earth. We’ve done the efficiency thing for three hundred years, and have gotten quite good at it. Like I said in my talk at StartupEmpire the other day, the future of wealth is now all about “Creativity”. Embrace it, or die.

7. They’re called PCs, they’re not called BCs. They’re called personal computers, not business computers. That being said, the demands of an affluent, creative American are different from the needs of an IT manager in a large widget factory. As the lines that separate business and personal get ever more blurry, I see all major computer companies [including Gosh! Yes! Apple!] struggle to bridge the gap.

8. I asked somebody at Dell what she thought made the company so special, what separated it from the others. “Basically, we’re tenacious sons-of-bitches,” she said. Good answer! As I spoke to more and more Dell folk during my many visits to their Round Rock campus in the last 6 months, this “tenacity” started to become easier and easier to sense. I find that encouraging.

9. The Edges cartoon series came directly out of my talking with Dell. They spent the last 20 years “pushing the edges” of manufacturing, supply, distribution and pricing [and the world, frankly, would be a lot poorer had they not done so]. Where else can they push outwards? Design? Customer Service? I have no idea. Only they can answer that. [Note to Dell Employees: If you can shed any light on this question, I want to talk to you. Please feel free to email me, Thanks.]

10. “Live on the edges or not at all” are pretty empty words, unless you can actually live by them. Harder than it looks. Maybe “Live on The Edges” is the right choice of words to articulate Dell’s Purpose-Idea, maybe it isn’t. At the very least, it’ll start a conversation internally, maybe externally as well. I don’t really care at the moment. All I’m trying to do is get my head one step closer to understanding the collective drive of the company. And I don’t mind failing a few times in order to get there.