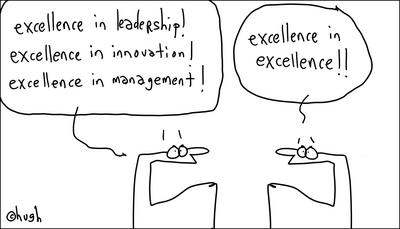 True Story: A friend of mine, call her “Jane”, is a really good corporate blogger. Really good. She’s won awards. Her work has been featured in the mainstream media. She’s a pioneer. She’s a rockstar.
Anyway, last week one of her company’s major competitors started their own blog, basically trying to emulate Jane‘s work, or perhaps more importantly, Jane‘s success.
What did Jane do? She was cool about it. On her blog she wrote them a “Welcome to the neighborhood” post. “Good luck with your new blogging adventure” etc. Oh, and she also praised one of her competitor’s products, which truth be told, is a really good product for that industry.
Well, no sooner had she posted it, than one of the senior suits wrote a group email to everybody, berating her for “Advertising one of our competitor’s products, instead of talking about our own excellent products”.
Sigh. What the poor suit doesn’t realize, of course, is that on a basic, primal level, how you talk about your competition actually says a lot more about you, than talking about yourself ever will.
I call this The Cocktail Party Rule- what’s true at cocktail parties is also true in marketing: “If you want to be boring, talk about yourself. If you want to be interesting, talk about something other than yourself.”
If you have the cojones to actually say “Nice job!” in public to somebody in the same business as you, it means you’re probably secure enough about your own schtick. It means you’re not exactly worried about your own product. And people can tell. Animals can smell fear, or the lack thereof.
I’ve seen this happen in the art world, many times. It’s the great artists who are the biggest fans of other great artists. It’s the hacks and no-hopers who go around calling the great artists “overrated”.
Jane explained her actions to the suit, and the logic behind them, the suit grumbled a bit, then conceded. Crisis averted.
Nothing I haven’t seen before. It’s human nature to want the benefits of this brave new world of ours, without wanting it to have to actually exist, without having to do anything differently themselves. At least at first. Education is expensive.