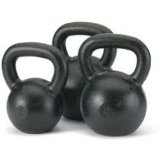 For the last few weeks, I’ve been having fun with my latest hobby- Russian Kettlebells. Here are some random thoughts:
1. They’re pretty brutal to play with; the good news is they’re great for both cardio and strength. Unlike gyms or exercise classes, they’re cheap and don’t require huge amounts of time. 30 minutes and a bit of flat grass in the park is all you need.
2. Back in New York in 1998, I was working with free weights and doing Kung Fu classes, pretty much every day (My Kung Fu teacher rocked). I was a monster. I liked it. Since then, I’ve been looking for that groove again, and failing for the most part. I think the reason is, to train that obsessively for so long is unsustainable. That being said, it was a good coping mechanism for the stress of that city. Now my needs are much simpler.
3. I was turned on to kettlebells by a master blacksmith in Scotland, who makes his own. “A gym in the palm of your hand”, is how he described it. Like the “cartoons drawn on the back of business cards” format, the utter simplicity of the idea appealed to me. Life is complicated enough.
4. Kettlebells are easy to hurt yourself with, if you’re not good at respecting your limitations. The few few weeks I had them, my initial enthusiasm for my new hobby taught me a few painful lessons. Now I watch my lower back like a laser.
5. Unlike free weights, they have a certain quality that makes training with them rather “Playfull”. I like that. So much of modern exercise is sheer drudgery. Instead, here’s a fun YouTube video of some guys on a beach, “playing” with kettlebells. It’s like watching a bunch of guys tossing around a frisbee, only heavier [No, you don’t need to toss them around like the guys on the beach. For the more basic kettlebell moves, go here. And for super-advanced, “Kettlebell Juggling”, look at this video.].
6. I use 35-pounders for upper body stuff, 55-pounders for lower body. Doesn’t sound too heavy until you try it, then you find out really quickly.
7. There’s a wealth of good learning material online, but this book, besides being an amusing read, I found very helpful. My favorite line: “Burn fat without the dishonor of aerobics.” Heh.
8. They’re called “Russian” kettlebells, although they’ve been used all over Europe for centuries. They’re still used in Scottish Highland games, for instance, but the Russians are the ones who use them the most, it seems. A 55-pounder has been a basic, traditional training tool in the Russian Military for well over a hundred years.
9. Kettlebells are more about “the importance of functional strength, rather than purely aesthetic gains”. Hence their appeal to the Russian military.
10. I have no big plans with this. No massive ambition re. feats of strength. I just want an exercise that (A) works for me and (B) easy to do every day. So far, so good.
11. Yes, Russian kettlebells are social objects.
[Update:] To qualify as a RKC Instructor, you have to pass the RKC Snatch Test with a 24 kilo kettlebell. This YouTube video shows what’s involved. Harder than it looks etc. Also, Snatch Testing video at the 2007 World Championships in Miami. Ouch.

Hugh,
So do you toss them around? I have been looking for something more interesting than the Oliptical and weight mach. but I’m not sure if a legally blind chick should be tossing weights around.
I would risk it (maybe with some steel toed shoes on though) if it actually made working out fun again!! I’m in pretty good shape but board to tears with my workout.

Rachel, no, you don’t need to toss them around like the guys on the beach. For the more basic kettbell moves, go here http://www.youtube.com/watch?v=Lwme8rkzetg

Hi Hugh,
Glad to hear that you found something you like. Exercise can get pretty boring, so the KB’s should help to provide variety and challenge.
Not sure if you know of Mike Mahler as he has a lot of great info. on KB training.
Best,
Coop

GymJones.com and CrossFit.com turned me on to kettle bell workouts about a year ago. I don’t know I managed all these years without them. They ARE social objects as well, aren’t they. 😀

I’ve been using kettlebells for more than a year now. I use them as part of my regular workouts–boxing, cardio, and weight-training. They are amazing. Be careful though…tough to use when not spotted by a trainer.

These are awesome if this is all you are into in terms of fitness. It doesn’t necessarily offer you a full fitness program; of course.
So, will this post get posted b/c it doesn’t call down Microsoft, or will my other post be appearing later? Just wanted to know if you are taking in new opinions.

OMG. I tried my first Kettlebell class this past Saturday at my gym. What a workout. I am still hurting and that was only with a 10 lb’er. I am looking forward to my next class! This is great for golfers and your hip flexors. I can’t believe I have never heard of it before.

Hugh:
I loved the post on kettlebells. And, I study Tsun Jo Wing Chun Kung Fu. They compliment each other very well. A great online newsletter for kettlebell enthusiasts is called Aggressive Strength. Great training info with a dose of inspiration to boot. http://www.mikemahler.com/magazine/index.html
Cheers,
Drake

Don’t drop one on your toe Hugh. That looks like fun though. I find bike riding to a great tonic. I’ve got legs of steel but puny forearms kind of like T-Rex. Have fun!
Beth

Wow. I’ve never heard of kettlebells before. That looks like a lot of fun. I hate the boredom of regular weights. Plus this looks like you can really get some good cardio out it. Thanks for the info. I’m going to keep an eye for some.

Kettlebells are quick and easy to use… I use 2 x 16kg ones (not sure in pounds) and combine single and double kettlebell excercises… I’m no pro but it is fun and effective !!