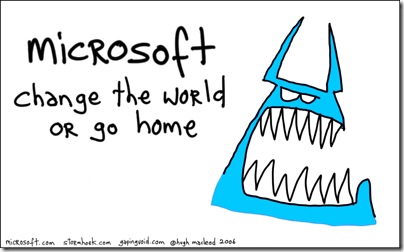 [Blue Monster PDC Edition- it’s colored azure for a reason.]
It was two years ago today that I first posted the Blue Monster on this blog. Thanks mainly to Microsoft’s Steve Clayton running with the idea [At great risk to his own career, I might add], it’s been quite an adventure for us both, to say the least.
Microsoft’s James Senior posted this two days ago:

About a year ago, my pal Steve Clayton (happy birthday buddy) unleashed a genius viral marketing ploy aimed at starting a conversation about Microsoft. It was really a call to arms challenging the company to reinvent itself. To innovate. To change the world.
Today we really did announce some stuff that will change the world, and it’s an amazingly exciting time to be at the company. Here’s the stuff that we announced today at PDC 2008.
* Windows 7 features
* Office Web Applications
* Office 14 features
* Live Framework
* Live Mesh Beta
* Live Mesh Dev Platform
* Live Mesh on the Mac
* Live Mesh on Win Mobile
* Visual Studio 2010 WPF
* Visual Studio Editor extensibility
* Windows Live ID and Open ID
* And more…
I think we’ve finally answered the call of the Blue Monster. We’re not going home, we’re going to change the world! Rock and Roll.

Here are some random notes on our little blue friend, in no particular order of importance:
1. I always liked what Dave Armano had to say about it:

Because everyone at Mix 08 who worked for Microsoft and handed me either a “Blue Monster” business card or had the sticker, seemed different. It was hard to put a finger on, but although they were believers in Microsoft, they also seemed to believe in an external vision that challenged Microsoft to make a meaningful impact in the world. It’s a non corporate honest opinion, and some at Microsoft embrace it publicly.
What’s to be learned? Blue Monster shows us that no matter how big or small the company that the world is a bigger place. And external influences can become internal influences. And it teaches us that if we are interested in the evolution of corporate culture, that symbols are important. If we don’t find our own—someone will find them for us.

2. There was a time, maybe a year ago, when I could have feasibly turned the Blue Monster schpiel into a full-time gig. A combination of random events and my equally random self somehow decided against it in the end. Probably just as well. It’s more interesting without it being tied to a private, commercial agenda.
3. So Microsoft wants to change the world. But as JP once reminded me, with the Blue Monster the converse is also true: the world wants Microsoft to change as well. Which is exactly how it should be.
4. When the Blue Monster first started getting traction, Sarah Blow and others warned me that there was a lot of talk amongst the geeks, about how aligning with Microsoft might damage my own personal brand… “Hugh embraces The Dark Side” etc. I was perfectly aware of the risk; and frankly I didn’t care. I liked the people from Microsoft I had met up until that point, I also had a point to prove about large companies and their internal cultures, about how the internet made it possible for large companies to talk to the world in new ways. The “Porous Membrane” etc. To hell with “Personal Brand” crap. Whatever.
5. There are a lot of gapingvoid readers who don’t much care for Microsoft, and don’t mind telling me so. Do I worry about it? Not really, hell, some of it I actually agree with. They’re entitled to their opinion. They may not care for the car, that’s fine by me, that doesn’t mean I’m not allowed to amuse myself, checking under the hood.
6. I am not a techie, I am not a coder. I’m useless at that stuff. What interests me about Microsoft is the “Culture” bit i.e. keeping 70,000 people happy and productive, while making a profit by selling nothing more than ones and zeroes. The “Purpose-Idea” of the place etc. When you have a company that large, that interesting, that passionate and that powerful, it’s a goldmine of new material to write about.
7. I’ve not done much work with Microsoft this year, mainly because I moved to West Texas. In December that might be changing. Watch this space.
8. Props to Steve Clayton for everything. He’s a rare breed.
[UPDATE:] Steve Clayton talks about the two-year anniversary:

What a ride that has been. An interesting ride and at times a dangerous one for me personally. As James Senior said in a post earlier this week the PDC has been a Blue Monster week – for the second birthday we couldn’t have picked a better week. PDC has been full of world changing announcements. Maybe they’re just world changing from where I sit so please don’t think I’m suggesting we just cured cancer or something….but I continue to believe this company does world changing stuff. Stuff we should be proud of and that’s the kind of stuff we announced this week. For me, the coincidence of timing is amazing.

It’s so funny, who the hell cares whether they care for Microsoft!
What I love about your work is the commentary through your sketches. It’s not like you declared your undying love for Microsoft and said everyone else sucks.
You just pointed out the “elephant” in the room in regards to what is perceived to be the problem at Microsoft.
Love or hate em’, we can all learn from them and what your gleaning from them too.

Happy Birthday Blue Monster – these days, two years is like a lifetime. And thanks for David’s post Hugh –
*Blue Monster shows us that no matter how big or small the company that the world is a bigger place.*
best,
bonnieL

I just love this. The void gets better and better.
Point 3. Yeah yeah!
As far as I`m concerned Microsoft have got the MONSTER and little else! I have to comment on Jame Senior`s insert though; thus…
The monster in a way makes more sense to me than semantics like mesh, office, 2010, framework and WPF. Why dont they really use it, really throw it around a little? Bill isn`t a great advert for anything but bad footwear.
I always wondered, W.T.F. does extensibility really mean? I know what its supposed to mean but it`s genuine b*ll*cks, like suggesting dinosaurs are future proof.
In a way this technical puffery and jargon is not much different from adwank brand speak really – it`s just an attempt to sound hip; verisimilar to car names but more obscure a & harder to decipher.
How about some simplicity amidst all this complexity, some communication, some real talk, some real language?
Yes, the geek shall in inherit the earth but the fact is we are all geeks now in a sense but just not that geeky.
To muso`s, designers, and creatives this language means nothing, we need to know that it does what we want not what it says on the box because the box is covered in B.S.. I have to use a Mac because I dont trust the language of microsoft – it sounds great for accounting and that is all.
But the monster, what a guy!
He must be a drummer.
Dont kill the badass outlaw inside you who needs to paint in the TX mountains. The west wasn`t won on salad, nor the war through compromise…

Although I’m a nobody, I had this up in my cubicle for a long time at my previous job. I removed the Microsoft portion, as you can imagine. It helped to keep me driven and focused on my goals.
Thanks, Hugh!

Thanks for this post Hugh. I like that you aren’t following established “rules” for personal branding. I think that doing so waters down a personal brand. It’s counter productive, since a personal brand is an expression of your personality – whether people like it or not. That’s the whole point.

Happy Birthday Blue Monster and how appropriate that its anniversary is pretty much right on Halloween!!! Blue Monster has inspired me throughout my work on Microsoft and I hope that i too will continue to try to “change the world ( for better! ) or go home”. hope to have more microsofty discussions soon Hugh!

Blue Monster or not.
The Empire (Microsoft) will strike again even if they have to change their business model from retail or prepackaged with computers to in the cloud.
Microsoft is capable of changing their business model and to re-invent themselves, just like Apple, IBM, Philips, Samsung, Sony.

Victor P, just checked out your blog.
I furiously disagree with your reply to Hugh above.
Victor wrote: “Although I’m a nobody….”
You’re wrong, wrong, wrong! So there!
bonnieL

Didn’t know anything about this phenomenon until I saw this blog post. How great to be able to influence a corporation in such a positive way, I don’t care who they are. Any impetus for self-reflection gets bonus points from me. Kudos!

Umm, this is going to make me seem like a jerk. This whole thing is a vaguery about an ad scheme to promote a giant company. Rather than trying to come up with some sort of inter-company philosophy, why didn’t anybody just ask where the negative press on Microsoft comes from?
Perhaps it’s the fact that Windows, every single version of Windows that I have ever owned, has had some bizarre error and crashed.
…or gotten a virus…
It’s weird that Apple doesn’t seem to get major outbreaks of viruses on their systems, isn’t it? That’s not something that perception can control. Microsoft laid off record numbers of it’s employment force during the 90’s. I’ve seen studies suggesting that over 50% of hackers in the world have at one time or another worked on a large Windows platform or directly for Microsoft.
So, why come up with this monster thing; which really, to people not washed in your culture, makes us roll our eyes. You know that scene in Fight Club, where the guy is talking about efficiency and his corn flour blue icon? THAT’S how this looks to other people. Just so you know.
This is definitely why I went into business for myself. Because, at what point can you look your boss in the eye, and tell him: “this isn’t okay. You’re screwing up.” -you can’t, and that’s not an accident. Large corporations pick and choose what rallies employees around one banner to increase production. Of course, it’s only the full brain-washed that ever fall for it.
What’s this campaign cost? Imagine, if that money, time, and effort were spent on designing a version of Windows that doesn’t crash after the first time downloads a virus.
It may justify the budgets of advertisers to be self-promoting, but it does nothing for faith in your products. I buy Mac; which is ironic considering that even THEY aren’t THAT good. They are just so much better than Windows, that I have no reason to go back and rely on crappy third party hardware manufacturers and an OS that works when it feels like working.
You don’t seriously take pride in collectivism, do you?

Um Jason, I think Hugh’s trying to influence Microsoft culture for the better. Of course MS is fcked, big deal. So is the economy. The point is – now what?