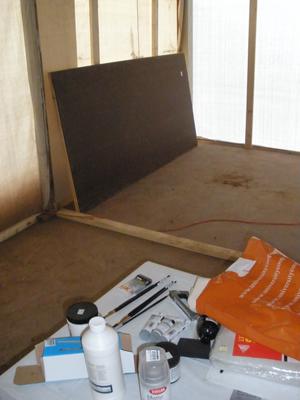 [Click on image to enlarge etc.]
For the last couple of months, I’ve been talking about a return to large-format paintings.
Originally I was planning 6-by-6-foot canvases; I decided instead to opt for 4’x8′.
I finally have my studio set up, as pictured above. It’s an outdoor studio, with cement floor, tin roof, and as shown here, canvas walls to keep the rain and dust out.
That’s a 4×8′ wooden board you see there, with two-by-fours framing it on the backside. I’m going to cover it with canvas and get painting on it, hopefully in the next couple of days, before I take off out of town on business at the end of the week.
In the foreground you see my acrylic painting materials- plus a ten-foot roll of canvas in the orange plastic bag. 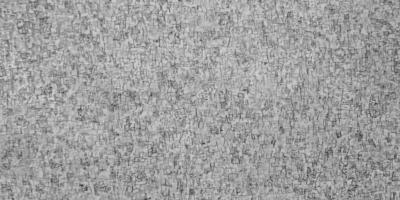 [A rough idea of how I’m hoping it’ll turn out, cannibalized from a photo of “Fred 44”. Click on image to enlarge etc.]
It’s going to be called “Desertmanhattan”. “Fred 44” was a ink-on-paper study for it, so go here if you want to get an idea of what the final work will end up looking like.
It’s called “Desertmanhattan”, simply because I’m trying to create a piece that captures the vibe I get from both living out in the middle of nowhere, here in the West Texas desert, and the big-city vibe I get when I’m on my business travels. The desert is an extreme place; so is Manhattan; they both inform the work I’m doing now. My drawing style was formalized whilst I was living in Manhattan, so the title makes compete sense to me.
Yes, I intend to sell it when it’s done. Yes, it’ll be really expensive [I’m putting out feelers to potential buyers. If you’re possibly thinking about becoming one of them, please feel free to drop me an email at [email protected], and we’ll start a conversation, Thanks.] .
If it goes well, I’m not going to suddenly quit everything else and start cranking out Desertmanhattan’s like an assembly line. I don’t foresee ever doing more than 4-6 of these pieces a year. I don’t foresee spending more than one week per month on them, either. I’ve got plenty other projects keeping me busy; plus it looks like the amount of traveling I’ll be doing in the next year is going to increase quite a bit.
As for the marketing, well, of course I’ll be using this blog and my Twitter feed to do the heavy lifting. Though my target market is not set in stone, I have a feeling the buyers for the large pieces will come out the prosperous end of the tech/VC/Silicon Valley/Web 2.0 community. They know me, they know my work, they know my value. Besides, the New York financial guys [a favorite target of the traditional art galleries] all seem to be losing their jobs at the moment.
And of course, “The Tao of Undersupply” will be seriously informing the marketing:

The biggest problem in the Western world is oversupply.
For every mid-level managing job opening up, there’s scores of people willing and able. For every company needing to hire an ad agency or design firm, there’s dozens out there, willing and able. For every person wanting to buy a new car, there’s tons of car makers and dealers out there. I could go on and on.
I could also go on about how many good people I know are caught in oversupplied markets, and how every day they wake up, feeling chilled to the bone with dread and unease. Advertising and media folk are classic examples.
So maybe the thing is to is get into “The Tao of Undersupply”.
If only 100 people want to buy your widgets, then just make 90 widgets. If only 1000, make 900. If only 10 million, make 9 million. It isn’t rocket science, but it takes discipline.
It also requires you to stop making the same stuff as other people. Doing that requires originality and invention.
Like it said in “How To Be Creative”, don’t try to stand out from the crowd, avoid crowds altogether. Again, it isn’t rocket science.

In other words, it’s better to under-supply the market, than to over-supply it.
“Desert” represents one side of me. “Manhattan” represents the other. We’ll see where this goes. Rock on.
[UPDATE] 24 hours later: 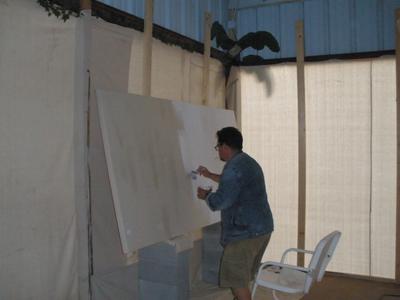 [Me applying to undercoat onto the stretched canvas. Click on image to enlarge etc.]
[UPDATE] 36 hours later: 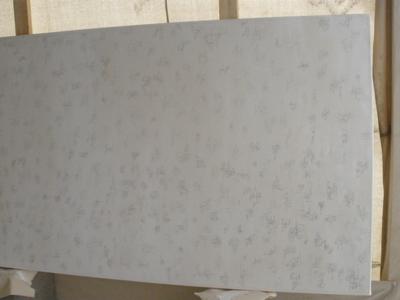 [Four undercoats of gesso and acrylic applied, then I get busy with the pencil on the canvas. Easy. Click on image to enlarge etc.] 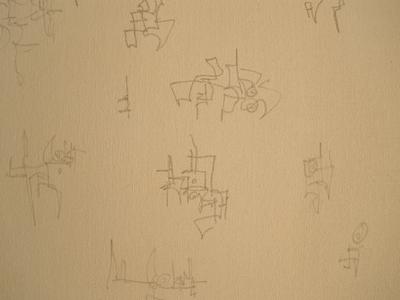 [Close-up. Note how the pencil shows up the texture of the canvas. Click on image to enlarge etc.]