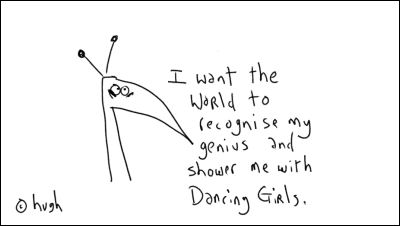 1. Since I got back from the road trip I’ve basically been locked up in my office, putting the finishing touches on my final edit for the book. It has to be at the publisher’s by Monday morning.
I’m pretty much done. Just going over it again and again and again, micro-tweaking the hell out of it.
2. I’ve been told that the official launch date is June 9th, 2009. Yes, for us Internet types used to immediate electronic gratification, that seems like a long way’s away. But hey, this is books, not blogging. I’m told designing a book properly takes forever. Ditto with getting the sales team up to speed. Marketing, ditto. I’m told that if you want your book featured in a magazine article for one of the majors, say, Forbes or Businessweek, they need to see galleys at least four months prior to the launch.
3. And then there’s the psychological pressure. You make a mistake on a blog post, it’s easy to go back and fix it, or at least, try better next time. But once a book is in print, the mistake is there, in hardback, on paper, forever. If you make a mistake on a blog, well, it’s your blog, so nobody really cares besides yourself. If you make a mistake with a book, suddenly there’s a whole list of people you’re letting down- editors, agents, sales people, retailers. As the deadline approaches, I feel this more and more acutely. It wasn’t something I ever really thought too much about before, until it became real.
4. I remember a decade or two ago, Woody Allen telling a journalist that he never, ever watches his movies ever again, once the final edit is in the can. At the time I thought that was rather odd. What? Don’t you want to occasionally visit your baby? Your masterpiece?
But having lived with this book in various manifestations for over four years, I can now totally relate to what Woody Allen was talking about. As my film director friend, Dave Mackenzie once told me, by the time you’re done with a large project, you are so bloody sick of it- all the pressure, all the meetings, all the changes, all the keeping the thousands of balls up in the air- that you never want to see it again. Though writing this book wasn’t nearly as much work as making a feature film, this feeling does permeate. This book is “me” four years ago. This book is not “me” now. I feel that in spades at the moment.
5. In one of the final chapters of the book, I tell how I never really set out to be a professional cartoonist. Nor did I set out to be an Internet consultant. They just kinda-sorta happened. I feel the same way about becoming an “author”.
6. A few months back I tracked down a very dear friend of mine, Mark O’Donnell and sent him an e-mail, congratulating him. Mark is pretty much my oldest “creative hero”, ever. I’ve known him since I was nine years old. Mark is the consumate, old school, New York humorist. He wrote for the Harvard Lampoon back in college. Later he wrote for The New Yorker. He wrote for Saturday Night Live. He wrote for Spy magazine. He published comic novels and wrote off-Broadway plays. He still lives in the same Upper West Side, rent-controlled apartment he moved into in 1976, the year he graduated from college.
Why was I congratulating him? Because after struggling away for all those decades- lots of highbrow, critical acclaim, but zero money- he FINALLY landed his first bit of massive worldly success. He wrote the words and lyrics to the Tony-Award winning musical [and later, the movie], “Hairspray”. It was huge for him.
So I write him an e-mail, sending him big kudos. The guy’s a genius, no one deserves a massive hit more than he. I just wanted to let him know that.
He wrote back: “And Hairspray is like only one per cent of what I’m proud of.” A-ha! Bingo. That pretty much is how I feel about the book. Just one small step in a very long march.
[PS: Mark also wrote the lyrics to John Water’s next musical, “Crybaby”, based on the movie with Johnny Depp. Rock on.]
7. I’m not worried about book sales per se. Having a bestseller would be lovely, sure, but no-one has any control over these things, especially not a first-time author. I’m sure as hell not relying on it financially. What concerns me far more is how the book will affect the rest of what I’m up to. For the better? For the worse? Again, I feel a lot of that is well beyond my control.
8. I wonder what my second book is going to be about…
[UPDATE] Mark left a comment below: “I’m happy for the ancillary coverage. You know more about me than my agent. Congrats on the bouncing baby book! It is a challenge to enjoy it and to keep perspective at the same time. — Mark O’Donnell”
[Note to Newbies: The book is based on a 10,000 word blog post I did back in 2004, called “How To Be Creative”. So far it’s been downloaded & read well over a million times etc.]

Looking forward to reading it Hugh.

I’m one of the million and more people who have read “How To Be Creative.” At one time, I even printed it out…but the pages got all mixed up and messed up.
So it will be nice to buy the book version.
Real nice!
Congratulations…wishing you all the success you deserve — which is a lot. 🙂
Mudd a.k.a. Oza
xoxo

The book will be a big hit, Hugh. Although I’ve learned from you that a narrow yet deep following on the web is far far more rewarding in all ways to a broad yet shallow jump into the old style fray.
Even though you have been known to enjoy the occasional shallow broad.
Best of luck and congratulations on finishing!

Excited about the book, “How to be Creative” is my favorite PDF ever.
So, road trip before huge book deadline? Procrastinate much? 😉

Always appreciate the candid self-observations, Hugh; thanks for posting them. Godspeed with the final “birthing pains”…

you nailed it – 100% – they are all my ‘babies’ but at the time I just want them to fly a long long long way away and never come back.
(I will be buying the book)

I’m really looking forward to the book. Despite the advantages of the online world, there is really nothing like a nice solid book in your hands.
As a musician, there are very few recorded performances that I have actually listened to. Although any mistake is solely on my own shoulders, it is still stuck out there, unchangeable. Music in general, however, is always changing…so I just try to perform more! We perform to practice, a professor once told me. Perhaps the same could be said between writing a book vs. a blog.

Hi Hugh,
Relax birthing is almost over and you can be proud of it. Love to read the book when is out there.
Good luck,
Roberto

Ahhhh….it’ grand to be a human being, whirly-gig imagination and all it’s contrasts, shadows and flash bulb brilliance.
I’m a buyer:-)

I’m happy for the ancillary coverage. You know more about me than my agent. Congrats on the bouncing baby book! It is a challenge to enjoy it and to keep perspective at the same time. — Mark O’Donnell

I’m happy for the ancillary coverage. You know more about me than my agent. Congrats on the bouncing baby book! It is a challenge to enjoy it and to keep perspective at the same time. — Mark O’Donnell

Hugh,
The second book should be about Global microbrands – you’d write a great book on that.
I’d buy the first copy.

I see a book reading at my gallery in your future…We will get you to Toronto one way or the other!

Glad to hear it is almost done Hugh!
I am not nearly as far with final edits as you. Mine is due to the publisher October 15.
And the process is just as you describe — intense, at times exhausting.
But I am excited to see your book in print. As much as I love the internet, I can’t wrap my hands around it, crack the cover open for the first time, smell the fresh ink and paper, and sip a cup of coffee while drinking in the words.
Books just feel different. And I think they are worth doing, even once, for the experience.
I am sure yours will be a big success.
Enjoy hitting send on Monday!

I know what you mean about being sick of a book – and I’ve only just signed the publishing contract!
I started writing my novel nearly three years ago. Since then it’s gone through about three major drafts, two title changes and countless little edits. I spent about two months this summer fine-tuning it, redoing the opening, rewriting the synopsis and cover letter, and sending it off round the publishers again. I was sick of it when I sent the last submission off. I dread to think how I’ll feel in a year’s time when it’s finally ready to hit the shelves!