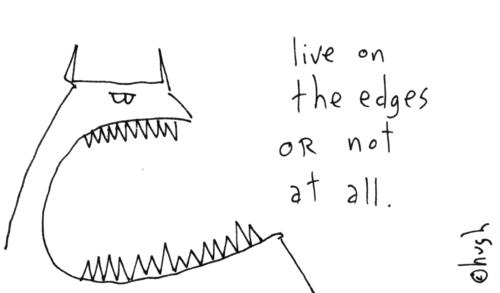 [“Edges 4”. Part of “The Edges” Series. Click on image to enlarge etc. Yes, I was thinking about Microsoft when I drew that etc etc.]
Out here in West Texas, we have a certain type of individual, who are affectionately referred to as “Desert Rats”.
Desert Rats are basically people who choose to live a spartan, alternative, self-sufficient existence out in the desert. Probably the most famous cluster of them around these parts can be found down in Terlingua Ghost Town, in the Chiquaqua Desert, about 100 miles South of where I live, close to Big Bend National Park and the Mexican border. Somebody just made documentary about them.
Terlingua Ghost Town used to be a small mercury mining town of about 2,000 people. Then in the 1940s the ore ran out, and the work dried up overnight. So people left. It became a ghost town, just like hundreds of other former mining towns here in the Southwest. A few decades later people looking to escape the rat-race in the most extreme way possible started moving down there. The utter harshness of the landscape somehow inspired them.
When talking about Terlingua, you never go very long without someone mentioning “The Porch”. They’d be talking about the porch of the Terlingua General Store, the place where people gather daily at sunset to drink beer, play guitar and tell stories. I’ve hung out there a few times. Got chatting to Doctor Doug, one of the local characters. Nice guy. He’s been living in a rusty, yellow, dilapidated school bus for 20 years or so [He gets a mention in the documentary, so click on the link above to see more].
But not all Desert Rats live just in Terlingua- they’re pretty much everywhere round these parts. I’ve met lots of them here in Alpine, for instance.
What you notice is that, their unconventional lifestyle notwithstanding, they’re quite different to the usual alternative Woodstock-college-student-hippie-drippie stereotype. They own guns and hunting knives, and will use them if they have to. Try trespassing on their land with bad intent one day, if you don’t believe me.
The other thing you notice is JUST HOW LITTLE MONEY some of them live on. Heck, I thought I was cutting back when I moved out here, but some of these people are off the scale. It’s not uncommon to see them living on $5-10 thousand per year. Lord knows how they do it; except that barter is a huge part of the equation.
Sure, by mainstream American standards you could argue the Desert Rats are an eccentric, “out there” bunch. But there’s something compelling about them, too. That great American ideal, “Rugged Individualism” is clear to see in their faces. Their lives somehow seem a lot closer to the 19th-Century Western pioneers, than to say, the present-day, Blackberry-addicted commuters of New York and San Francisco.
And you always ask yourself, Why? What makes them take this particular path?
Short Answer: Because they can. They wanted to do it, sometimes for good reasons, sometimes for bad. And so they did, for better or for worse. And yes, though parts of their lives seem incredibly rewarding- especially from a distance- they’ve also paid an equally incredibly high price for the privilege, which isn’t always so obvious at first glance . This incredibly high price is no different than anywhere else, whether we’re talking here in West Texas, or we’re talking a big tech company in Silicon Valley, a startup in Chicago, a Wall Street bank. “Living on The Edges” is invariably a damn expensive business.