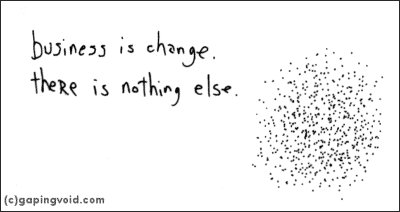 I’ve worked with a lot of companies over the years, big and small.
I have found that even small companies are remarkably complex organisms. But of course, anywhere that ambition is allowed to focus usually is. Human beings are messy creatures.
It seems to me that in any company, large or small, you can divide the people into three broad categories.

1. The “Changers”. These are the people who use their work as a platform to “Change The World”. They go into a market and try to change it, in order to create something better, both for themselves and for the market at large. They can be the CEO or work in the mail room. Theirs is not a social position, it’s a psychological condition.
2. The “Contributors”. These are people who want to do their jobs, do it well, and get handsomely rewarded for it. They don’t necessarily see the need for “change” per se, they just want to see what works, and get it done. They want to find out who’s on the winning team, and get themselves a place on it.
3. The “Coasters”. They just want to turn up and get paid. Their lives and identities are outside their work- families, friends, hobbies etc- their job is just a means to an end; a way to pay for their “real lives” elsewhere.

None of the three is necessarily better or worse than the others- we all have different needs, different agendas, different temperaments. We’ve all made different decisions about what kind of life we want to lead, what kind of compromises we’re willing to make, what kind of adventures we want to have. All roads exact their own unique toll. All choices come with a price.
I suppose I’ve always ended up in the “Changer” camp, somehow. It was never deliberate. It was just about how I relate to the world. Sometimes it was a definite advantage. Other times it was career suicide.
So in the last couple of weeks I’ve been having a lot of conversations with people at Dell. The subject of the need to “Change Dell” has come up a bit. Actually, no. It has come up A LOT. A WHOLE LOT.
As a “Changer”, the word “Change” really doesn’t frighten me. To talk about “Change”, doesn’t necessarily imply that there’s anything abnormal or wrong going on. As I’m fond of saying, all business models are wrong. Whatever system you’ve got in place, it’s yesterday’s model. Whatever process you’ve got installed, the world has since moved on- all you can do is try to play catch-up, to greater or lesser degrees of success. Hence the cartoon posted above.
So in a meeting in Round Rock, I ask this one Dell person, “So why are you guys interested in talking to me? I’m no Peter Drucker, I’m just a cartoonist.” The person answers, “Because we like your very atypical point of view. We think it could perhaps be useful to us.” Fair enough. If I had been that person, I’d probably have said much the same.
So these last few weeks, I’ve been mulling over the word, “Change”, and how it applies to Dell. Or to put it more simply, what ACTUALLY needs to change? Sure, they’ve had their fair share of trials and tribulations over the last few years. But there’s a lot that they’ve gotten right, as well. Sure, you might prefer Apple over Dell for your personal choice of computer, but guess what? The consumer sector represents only 15% of their total business. In the other 85% of the business, B2B, they’ve not been doing too shabby. The company still makes a profit. Their biggest customers still return their phone calls. Sure, they have their issues, but hey, who doesn’t? As I’m fond of saying, this stuff is HARD. Get over yourselves.
i.e. “Change”. What does it REALLY mean for Dell? I’m just asking… Yes. I really, really want to know.
I’ve also been mulling over how this experience differs from the work I’ve done with Microsoft.
One thing I have noticed so far inside the company, is how often the word “Dell” is used interchangeably with “Michael”. Sometimes we’re talking about the man, sometimes the company. The lines seem very blurry. I don’t recall “Microsoft” and “Bill” being so interchangeable, I really don’t.
Michael Dell seems to cast a huge presence over the company, even more so than Bill Gates casts a presence over Microsoft. This is no bad thing. It just is what it is.
Actually, I find this quite an endearing aspect to the company. Michael is certainly no absentee landlord CEO, from what I can make out. Every day, I’m told he sends a lot of emails to people to lots of different levels in the company. He’s very hands-on, he doesn’t just hold court with the people reporting directly to him. Dell might be a Fortune 50 company, but there’s something about it that is STILL just this crazy college kid from Austin, building made-to-order computers in his dorm room for his friends. These humble roots still hold strong. Walk around the offices, and you can still smell them around you.
So one evening last week, after a long but interesting day over at the Round Rock offices, I’m having dinner with an old friend in South Austin. A nice little Mexican joint I’ve become very fond of. Avocado margaritas. Smoked pork tacos that melt in your mouth. It’s all good.
My friend asks me how I’m getting on with this new Dell project. I tell her, “Well, I’m finding it pretty darn interesting so far. But at the end of the day, if Michael Dell doesn’t grok it, there’s not much I can do. From what my gut tells me, it seems like it’s very much ‘his’ company, even more so than Bill Gates and Microsoft. I could be wrong, but there it is… Of course, if he does end up grokking it, then it’ll get pretty intense, pretty quickly. But in a good way.”
My friend and I are sitting there, enjoying the evening, talking about the good old days, back when we both attended university in Austin. Suddenly in the back of mind, I’m thinking about the “Changers” inside Dell. These, I decide, are the people I need to speak to. All roads ANYWHERE worthwhile begin with these good folk. The rest can look after themselves. The rest won’t quite understand me, and there’s simply no point pretending that they will.
It is true. I don’t know EXACTLY what I’m looking from them quite yet. It’s still early days. Then again, a jazz musician never knows EXACTLY what notes he’s going to play, before the gig actually starts…
We live in interesting times…