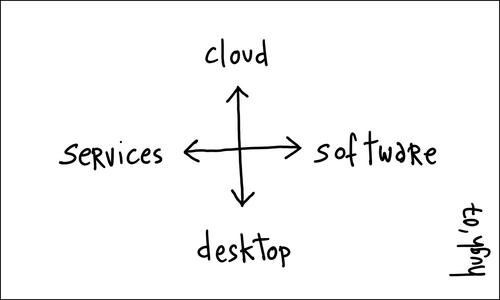 About a year ago, I was at a geek breakfast in London with Steve Clayton and some other folk, including a few people from Microsoft.
Steve and some other geeks were talking about “The Cloud”. At the time Steve was making the transition from working in the UK Partner Division, to working in the “Software & Services” division of Microsoft, which is how the conversation came up.
Right then and there I drew the cartoon above. Steve saw it, and right away asked me if he could use the picture for his business card, which he now does.
That was the first time I really started paying attention to the term, “The Cloud”.
I would by no means call myself an expert or an authority on the subject, but in the last couple of months I’ve been getting increasingly aware of “Cloud Thinking”. It’s seriously interesting to me.
As far as I can tell, all three of the big tech companies I know best, Microsoft, Sun and Dell, seem to be betting a lot of their future on The Cloud. It was even just announced recently that Dell was applying to trademark the term, “Cloud Computing”. Heck, even my friends over at Techcrunch are looking to get a piece of the action.
Even today, I learned that Microsoft is now seriously planning for the post-Windows era, and you guessed it, The Cloud features heavily. And Businessweek just ran a big article on it:

A Sea Change in Computing
Some analysts say cloud computing represents a sea change in the way computing is done in corporations. Merrill Lynch (MER) estimates that within the next five years, the annual global market for cloud computing will surge to $95 billion. In a May 2008 report, Merrill Lynch estimated that 12% of the worldwide software market would go to the cloud in that period.
Those vendors that can adjust their product lines to meet the needs of large cloud computing providers stand to profit. Companies like IBM, Dell (DELL), and Hewlett-Packard (HPQ), for instance, are moving aggressively in this direction. On Aug. 1, IBM said it would spend $360 million to build a cloud computing data center in Research Triangle Park, N.C., bringing to nine its total of cloud computing centers worldwide. Dell is also targeting this market. The computer marker supplies products to some of the largest cloud computing providers and Web 2.0 companies, including Facebook, Microsoft, Amazon, and Yahoo (YHOO). “We created a whole new business just to build custom products for those customers,” Dell CEO Michael Dell says.

I was also recently really surprised and delighted about all the discussion my last post, “The_Cloud’s_Best-Kept_Secret”,_seemed_to_generate._Not_just_the_amount_of_discussion,_but_the_quality_of_it,_from_some_of_the_smartest_people_I_know_on_the_planet._People_like_Tim_O’Reilly,_JP_Rangaswami,_Dennis_Howlett,_James_Governor,_all_piping_in._Rock_on.
And_of_course,_there’s_the_