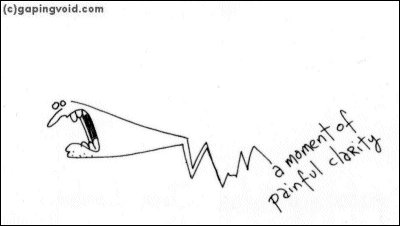 Hugh, I’m curious what exactly they want you to do? Their direction or lack there of baffles me.
Although a reinvention can be many things or have many meanings, setting the course of a company the size of Dell is a tall order. A tall order that a CEO and a board of directors are paid to envision and carry out.
Companies hire consultants all the time, that’s not a big deal, however it strikes me that if they don’t have an idea of what direction they need to go in, the management needs to change before anything meaningful can occur.
It would be a different story if they had an idea and needed expertise in getting there, but it’s completely another when they ask someone to tell them where they need to be. The old quote from Wayne Gretzky applies here. The reason for his success was that he didn’t chase the puck, he skated to where he thought the puck was going to be.
Clearly their present leadership is unable to do this, so unless you plan on taking up permanent residency at Dell, they’ll still have trouble long-term. That is unless they have a clear vision and just don’t know how to get there (enter Hugh), which takes me back to my opening line/question.

There’s lots of stuff to chew on here; so let’s make a list:
1. So far, the haven’t told me what they want me to do. I’ve not even been officially hired by them yet, though we are talking. We’ll see. I’m just kinda making it up as I go along. Microsoft never hired me to create The Blue Monster, either.
2. I think the “re-invention” will come from four angles:

i. Evolution of customer service. Sure, they have a ways to go. Then again, don’t we all etc. They’ve certainly come a long way since Jeff Jarvis and the whole “Dell Hell” episode, which gives me reasons to be cheerful.
ii. Design. Ten years ago, I didn’t own a computer. I really didn’t. The company I worked for gave me one- a Mac desktop. The internet was still relatively still in its infancy back then, so besides using Word to do my job, sending emails, and surfing the net occasionally, I didn’t really have a lot of use for it. Now I can’t imagine life without my laptop.
To use a Real Estate allegory: When your company sets you up with a temporary accommodation in a new town, you don’t really mind too much that it’s Embassy Suites. It serves a function. But let’s say you’re looking for a new house for you and your spouse and young children to move into, your needs become A LOT more exacting. Not to mention, a lot more expensive in terms of both square footage and decor. There’s a reason why commercial real estate tends to be cheaper than residential etc.
More and more people are using their own computers to do their work. Their “Own Homes” for their data, as it were. Dell has long been been in the “Temporary Accommodation” business, for other people’s data. And now as the market changes, they’re having to make the move from building “Embassy Suites”, to building actual “Private Dwellings”. There’s a contextual headshift to work through. And it won’t happen overnight- it’s a big company.
iii. India & China. In 2007 for the first time, Dell made more money from outside the USA than from inside it. 50.2% vs 49.8%, I believe are the figures. The question is not about how one get more business from the West Coast, Mac-using hipster crowd. The big question is, how do you get technology into the hands of people who THIS SIMPLY WOULD NOT HAVE BEEN AN OPTION FOR, even a couple of years ago?
iv. Culture. To me this is the biggest issue of the four. You can’t thrill your customers until you thrill yourself first. Let’s face it, a big part of the Dell schtick is built around processes- sales, manufacturing, controlling costs and all that lovely, corporate back-office stuff. That’s fair enough, most big companies operate like this. I would very much like to know, what percentage of Dell employees feel “This is just a paycheck”, versus how many feel, “Dammit, we’re frickin’ changing the world here”…?
The fact is, one can never underestimate the importance what the military call, “Esprit De Corps”. One can never underestimate the importance of what my friend, Mark Earls calls, “The Purpose-Idea”. If you work for Dell [or for any other company, really], I’d seriously recommend you go check out his “Bananas” book to find out more.
It’s not about “The Brand”, People. It’s about something far more important.

3. Though re-invention may be a favorite word of mine, I think it might be a bit strong in Dell’s case. Though Dell has plenty to keep itself busy over the next couple of years, it’s not exactly a dying company. It’s not exactly a company in crisis. But, as I’m fond of saying, it is entering a new, globalized, internet-enabled era. Things change. Contexts change. Adapt or die. Simple to understand, far harder to execute.
4. I think it’ll be tempting for a lot of people to say, “Dell sucks. F*ck off, Hugh”. Whatever. Any schmoe can have a opinion. What’s far more interesting [and far harder] is figuring out EXACTLY WHAT you’re going to do to solve a problem. The good news is; I don’t claim to have the answers; I’m just a fly on the wall. But I am genuinely curious what the answers might be. Hence this blog post. We live in amazing times, and this all seems to me like another good opportunity to prove it. Exactly.
[Bonus Link:] Dell’s Richard Binhammer points to some recent Michael Dell interviews in the mainstream media, which I found to be very interesting reading. Rock on.
[Bonus Link:] BoingBoing describes Dell’s latest product offering as “Small, gorgeous & cheap.” Cool.
[UPDATE:] Microsoft’s Ray Ozzie made a recent keynote: Here are his salient thoughts:

1. Constraints are empowering
2. Accept threats as resignations
3. Never follow; either leapfrog or stop
4. Diversity means survival
5. Don’t tolerate intolerance
6. Strategy and architecture are inseparable
7. Short and direct earns respect
8. Delaying the inevitable inevitably backfires
9. A re-org will never cure what ails you
10. You needn’t be an #%@hole to get things done

[From an excellent post on “Belief”, by James O’Neill.]

Â«And now as the market changes, they’re having to make the move from building “Embassy Suites”, to building actual “Private Dwellings”.Â»
This quote, Hugh, reminds me of why I’ve been looking at Dell subsidiary Alienware for my next computer purchase (to replace a recently deceased machine of that same brand). I have a Dell that works great as an “industrially cheap looking generic” laptop for when I’m working in a coffee shop, and I want an Alienware desktop that is a little more “fun” and custom and fits well in my personal environment as a play/work machine snuggled beside my Xbox 360.
I’m not saying that “more sub-brands” is the answer to Dell, but more that I realize how much customization and personalization seem to inform Dell’s strategy at this point (and that of the other manufacturers with perhaps the exception of Apple). Perhaps the better question might be how do they bridge that gap between brand-cultures to better make “real Dell” as “exciting” and “personal” to consumers as Alienware does well enough within a smaller niche of system sales?
How do you keep an assembly line producing thousands of systems a day from producing generic impersonal machines?
(To me Apple designs get lauded for “personality”, but whatever personality is there in the design of the devices gets drowned out in the millions of ads and clones you see in a given day.)

Totally agree with your thoughts on Dell. Do have a problem with Dell’s Hybrid being cheap and gorgeous.
It might be cheap and OK in the U.S., but as always, carrying it across the Atlantic transforms it into overpriced and a missed opportunity. $500 or £499 ($989 apparently)

This is all true, but may I add that there are two laughably simple things Dell is doing wrong.
1. They are constantly discounting. PIMS research 25 years ago showed that this kills brands; it says “we make crap products”; it trains customers to expect bribes; it is one reason why General Motors which makes big cars has a far lower market cap than Mattel, which makes toy cars.
2. They fail to use data intelligently (if at all) in their direct marketing. So their messages are not personal -nor so they look personal, being what I call internet leaflets.
One could elaborate, but those things are enough a) to destroy brand value and b) screw up your marketing.

Hi Hugh,
How do you interpret #3 from Ray Ozzie’s list — “Never follow – either leapfrog or stop?” What’s the benefit in stopping? Is it that it gives you a chance to regroup, rethink, and (possibly) redirect?
Thanks! Love your blog —
Julia

“…Delaying the inevitable inevitably backfires”
Well now, this hits home, and really sucks all at the same time!

I would interpret #3 by “either release a new product that exceeds and sets new consumer expectations, or stop and strenghten your current offerings” instead of blindly following others feature-by-feature.