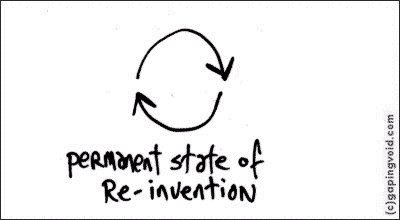 Four years ago in “The Hughtrain” I published the cartoon above, with the following thought beneath it:

: There’s only one thing harder than starting a new business: Re-inventing an old one.
Start-ups are fine and dandy, most people reading this will know all about them.
But what about Start-Agains? Are they an exercise in futility or a tremendous opportunity?
THOUGHT: The future of advertising is clients increasingly asking their agencies to help re-invent not just their brands, but their actual companies. The future is agencies being increasingly unable to deliver on this.
Out of this wreckage a new industry will emerge…
So how do companies, businesses, brands etc re-invent themselves?
Big, big question. Worth a fortune to know the answer.
Actually, the answer’s pretty simple: The same way humans re-invent themselves.
I know. It shouldn’t be that simple, but it is.

1. I’ve been thinking about this a lot lately. I like the entry, though four years later, I’m not sure how comfortable I still am with the statement, “Actually, the answer’s pretty simple: The same way humans re-invent themselves. I know. It shouldn’t be that simple, but it is.”
Corporate re-invention may be in simple in retrospect, but when it’s happening in real time it’s a tough, nasty, brutal business [Ask IBM if you don’t believe me]. Not for the faint of heart. But that’s what makes it so damn interesting. And potentially lucrative.
2. In the early 2000’s I had gotten quite disillusioned with traditional, Madison Avenue advertising, the industry I had entered when I left college [Though let’s be honest, it had never thought that highly of me, either, but that’s a story for another day].
Thankfully, with the advent of The Cluetrain, blogs and what later went on to be called “Web 2.0”, it seemed a new world order was emerging. The Internet was changing things; just none of us knew exactly how. But it was damn exciting new reality to contemplate.
In 2004, I first started articulating a belief that I still hold true today- that good, well-executed communication via blogging can make a huge difference in the fortunes of a company, large or small [I went on to explain it as “The Porous Membrane”]. And this time, the emphasis would not be a one-way message, but in a two-way “Conversation”.
Of course, “Conversation” is just a metaphor. When was the last time you wanted to phone up Hershey’s and have a long, deep, stimulating conversation with one their employees about 75-cent candy bars? No, sometimes you just want to put your money on the counter of the convenience store and buy your kids a little treat. And. That. Is. Enough. Human beings don’t scale. Our capacity for deep-and-meaningful is limited. “Conversation” is just convenient shorthand to better explain how markets- suppliers and buyers- relate to each other as human beings, not just as numbers on the spreadsheet. But that’s all it is. That’s all it needs to be.
Since I’ve become aware of this new world of Web 2.0, I’ve always been interested in testing its limitations, especially when it comes to marketing. So I’ve always been on the lookout for new opportunities in this area of business.
3. Earlier this year I started a conversation with Dell. So far the conversation is still going on. Some folks inside the company had seen The Microsoft Blue Monster and wondered if there was anything in this kind of thinking that could help their company. I’m guessing the answer might be “No”. The Blue Monster came out of pretty unique, random circumstances. Which of course, is the whole point. Ergo, I’m not really interested in a cartooning gig with Dell per se. I am, however, interested in the company.
4. It seems to me that, like a lot of large tech companies of a certain age, Act One in the Dell drama has reached its end. The war to get computers onto the desktops of the developed world, cheaply and easily, has been largely fought and won by companies like Dell, Microsoft, HP and Apple.
Mission Accomplished.
But what happens in Act Two? How do large tech companies like Dell have to re-invent themselves in order to make the grade? To keep their ever-growing army of customers and shareholders relatively content? Seriously. I want to know.
5. What needs to happen in order for Dell to become a better company? What needs to change? What needs to remain the same? These are huge questions. Like I said, it’s worth a fortune to anybody who can come up with good answers.
6. What is “The Conversation” that needs to happen? You tell me.
Over the last few years, I’ve had a few ideas about marketing and the internet. English Cut, Stormhoek and The Blue Monster were opportunities for me to prove them. And for the most part, I succeeded. Dell might be another opportunity. I’m not sure yet.