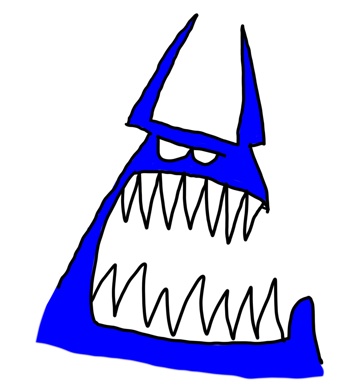 I haven’t talked about The Blue Monster for a while.
The Blue Monster, as you will remember, is a cartoon-based “Social Object” that me and my Microsoft buddy, Steve Clayton, unleashed on the good but unsuspecting folk at Microsoft. For those unfamiliar with it, you can find the backstory here on Google.
One of the reasons I haven’t talked about it much lately, is simply because there is no longer the need. To paraphrase Steve, “It’s already out there, it’s already working its magic. It has a life of its own and it no longer needs us.”
Exactly. And as my friend, Tara Hunt so rightly pointed out, to push it too hard, especially with Microsoft management giving it a big thumbs-up, would somehow defeat the purpose. If overused, “Subversion as a marketing tool” can be counterproductive, especially if it comes from above.
In 2007, the conversation was all about “THE” Blue Monster. But in 2008, a new conversation seems to be emerging: “A” Blue Monster.
Let me explain:
I’ve been talking to some companies recently, talking about doing some new business with them. Without any doubt, the question I get asked the most is, “Can you make a Blue Monster for us?”
Obviously, when they’re talking about “A” Blue Monster, they’re not talking about a wee blue cartoon character with pointy horns, that hails from Redmond, Washington.
What they’re talking about, of course, is a “Social Object”, not necessarily a cartoon, designed to create what I loosely describe as “Marketing Disruption“.
It’s not unlike when you’re talking about Seth Godin. When you say, “THE” Purple Cow, you’re talking about his wonderful and seminal marketing book from a few years ago. But when you talk about “A” Purple Cow, you’re just talking a about a product, any product, which from a marketing standpoint has been designed so well, it does not need any traditional marketing per se. It’s so “remarkable” for what it is, people can’t help but talk about it. And so the word spreads, almost by magic. Seth actually gives a really good example of exactly that here.
So what’s the difference between a Purple Cow and a Blue Monster? Well, we could split hairs on that one forever, but for me, the main difference is Purple Cows have their “remarkability” baked into the product. Blue Monsters are more about the “Social”, the interesting bit is the interactions that happen AROUND the product. That’s what gave our little wine company the edge when marketing Stormhoek. The VAST majority of our conversation was not about the wine in the bottle. The conversation WAS ALL ABOUT the people drinking it. As we were fond of saying, “Wine is the ultimate social object. It’s only interesting AFTER the cork is pulled.”
So in conclusion, yes, something has recently evolved in my thinking. Though my relationship with Microsoft remains as strong as ever, “Blue Monster” now means something far bigger to me than just cartoons, gapingvoid, Microsoft, Redmond etc. The Blue Monster is all about the Social Object.
I have often said, I believe Social Objects are the future of marketing.
Let me modify that slightly: I believe the Blue Monster is the future of marketing.
[UPDATE:] Steve Clayton sent me the following message on Twitter: