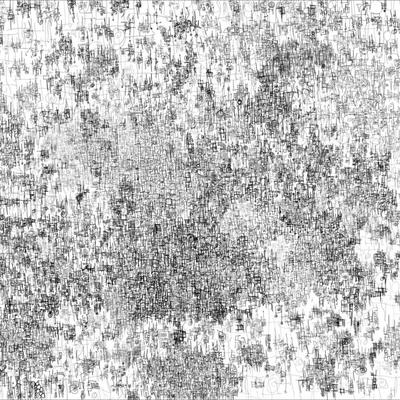 [Tablet PC sketch of what I have in mind. Click on image to enlarge etc.]
One of the things I like about Twitter is that it allows you to have instant feedback from lots of people while you’re thinking out-loud.
Case in point: If you have been following my Twitter feed recently you’ll have noticed me bandying this idea around, about doing large pieces. Namely, large, abstract paintings on canvas.
Basically, the idea is to create six-by-six foot canvas, covered with a field of my obsessive “squiggly” style. The image above, which I made digitally on a Tablet PC, should give you a pretty good idea what I mean.
So far the feedback has been tremendous. I’ve got dozens of comments, both public and private. Thanks for that.
I think being out here in Alpine, Texas, covered under a blanket of desert air and “Big Sky” brought about a wee change in me, at least in what I find interesting artistically. The “cartoons on the back of business cards” format came about in New York City, when living conditions, shall we say, were far more intense, crowded and cramped. Not to mention, I was ten years younger. Things change.
Acquiring blank business cards and a few pens is a LOT simpler and easier than making big paintings. With the latter, suddenly you have to start thinking about renting studio space and buying materials, which are not cheap. Then you have to find a buyer for the pieces, to offset the cost of making them. Then you have you have to figure out how to ship them to their new owners without them getting damaged. Plus a myriad of other pain-in-the-ass factors to consider.
Whatever. It’s all exciting stuff. I’m looking forward to finding studio space in the very near future. Though to be honest, I have no intention of ever becoming a permanent, full-time artist. Too much else going on. Too much else out there worth getting interested in. I like to juggle things around. Keeps things new and interesting. We shall see what happens.