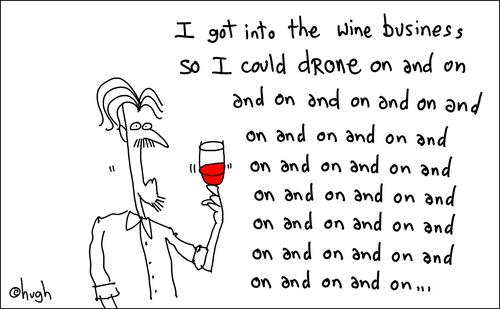 After a couple of months’ silence on Stormhoek, I’m ready to start talking about it again.
[The short version:] Stormhoek basically has new owners, Origin Wines of South Africa. They bought it when Orbital Wines, Stormhoek’s main importer in London, went out of business, due to cash flow problems. Origin Wines is owned by a guy called Bernard. He and I have been talking for these last few months, trying to work out a deal. Looks like we’ve finally made one.
In an ideal world I would’ve been a bit more talkative and transparent. Was it a bad call on my part? From the average perspective of a blogger with little direct interest in the brand, I could see why they would argue that position. But in the long run, me keeping my mouth shut probably saved the brand, the deal with Bernard, my interest in a company I dedicated three years of of my life to and, not to mention, the jobs of many dozen South African vineyard workers. So fuck it. Take the hit and move on.
So what’s the new plan? What will Stormhoek 2.0 look like?
Actually, not that different from Stormhoek 1.0. Between 2005-2007, Jason Korman and I tried out a lot of different experiments with social media. Some worked better than others. Some of the stuff we had high hopes for, utterly failed. Some of the stuff we had very small expectations for, caused major earthquakes in the wine marketing world, and sold many tens of thousands of wine cases. Like they say in the movie business, nobody knows anything. That being said, we did learn the hard way that there’s a lot to be said for keeping things simple. Ergo:
Stormhoek 2.0 has three main prongs:

1. Getting bottles of wine into the hands of my friends and peers i.e. the bloggers and the Web 2.0 crowd. Sponsoring geek dinners, Web 2.0 parties, conferences, that kinda thing.
2. Lithographs. We had a lot of good fortune creating limited edition, fine art prints. Everything from the Blue Monster series, to the Techcrunch party poster. Basically, I want to spend a LOT OF TIME in the next year, signing limited edition lithographs and getting them in to the hands of anybody who may want one. These lithographs will hopefully become “Social Objects”, which anyone who knows me will know, I believe is the future of marketing. It is my belief that, if we can get enough of them printed, signed and out there, they’ll create enough interesting conversations which will INDIRECTLY move a lot of cases of wine . The big question is, [A] How many prints would I need to sign in order to make that happen and [B] If the answer is, “A Lot”, will I have the time, discipline and stamina to go the distance? Yes, it’s a huge challenge. Then again, so is climbing Mount Everest.
3. Blogging. Goes without saying.

Yes, Jason and I are still working on Stormhoek together. And Graham Knox, who was until recently the head of production down in South Africa, talked to Bernard this morning about keeping on working with Stormhoek as well. Go figure.
One final thought: For all the crap that went down over Orbital’s demise, I’m actually kinda glad it happened. A lot of dead wood was cleared in the process; I think Bernard will make a much better partner than some of the people, now moved on, that I’ve had to work with during the last three years. All in all, I think we’re in a much better position to carry out my “Evil Plan For World Domination” than we were a year ago, so I’m actually pretty happy and excited. Rock on.
Feel free to drop me an e-mail if you have any ideas which may help the cause. Thanks.