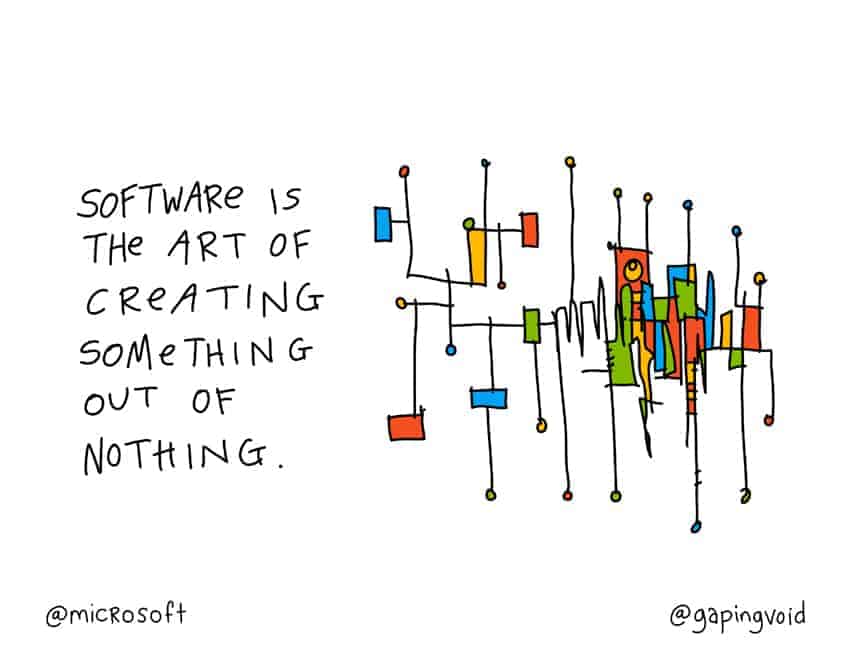 On Page 122 of this month’s Wired Magazine, I’m given a brief mention in the first paragraph of an article, “Open Source Software Made Developers Cool; Now It Can Make Them Rich”, all to do with the monetization of Open Source software. Here’s the online version.

Last spring, marketer and blogger Hugh MacLeod posted a question on his site: If open source is such a phenomenon, where are all the open source billionaires? His audience wasn’t amused. Open source software relies on a community of volunteer developers who tinker on, write for, or amend a program, then give it away free. MacLeod’s site filled up with complaints that even to look for billionaires violated the spirit of the open source movement. “There have to be rewards,” one commenter wrote, “but they don’t have to be financial.” Another simply recommended that MacLeod “shut the fuck up,” adding: “You don’t know what you’re talking about.”

I would agree with this charming “shut the fuck up” fellow that I know very little about software. I have never claimed to be that interested in it. What gets me working for Microsoft is that I’ve always been very interested in something else, namely, how people make a living. This is true for large companies, small companies, billionaires and “humble tradesmen” alike. This is why I can work with a large software company like Microsoft, or a small tailoring firm like English Cut, and find them both utterly fascinating. Everybody needs to get paid; that is the great constant in business.

Last summer, at a dinner party in London, I had the great pleasure of meeting Simon Phipps, the Head of Open Source at Sun Microsystems. What a great guy. Insanely smart. Enjoyed his company immensely. A lot of the conversation was off the record, but one of my main take-outs was that Simon passionately believes that “The Future Is Open Source”.

Simon may be right, he may be wrong, he may be a little bit of both. The future always has a way of surprising us all. But for sake of argument, assuming that “The Future of Software is Open Source” is proved correct in time, perhaps this would be a good time for my client, Microsoft to ask the question: How does a software company make money if all software is free?

The answer, of course, was hinted at in the aforementioned Wired article. With Open Source, people don’t pay for the software per se; but they DO pay for the peripherals.

How can you build a business by giving away the store? The money comes from selling add-ons, service contracts, and hardware to go with the software.

It took me a while to figure this out, but what applies to Open Source, also applies to Microsoft.

When you buy a Microsoft product, you’re not just getting ones and zeros. There’s also a form of “social contract” implicit in the commercial transaction. You gave them money, this entitles you to certain expectations.

A few weeks ago, I met a young developer who worked in an IT department of a large insurance company. I asked him what kind of software did he use. Answer: About 75% Microsoft, 25% Open Source. I asked him why did he not use more Open Source? I thought IT people loved Open Source?

“If something goes wrong with Microsoft, I can phone Microsoft up and have it fixed. With Open Source, I have to rely on the community.”

And the community, as much as we may love it, is unpredictable. It might care about your problem and want to fix it, then again, it may not. Anyone who has ever witnessed something online go “viral”, good or bad, will know what I’m talking about.

The reason Microsoft is able to charge the money it does IS NOT JUST BECAUSE OF THE SOFTWARE. Like Open Source, the social contract can often matter far more than the ones and zeros.

[UPDATE:] After reading the comments below, a friend of mine sent me the following e-mail:

OMG open source people are funny. Is it always that easy to make them dance? 🙂
What strikes me as particularly entertaining is that, if their
product/service offerings ARE comparable or better than Big Business
offerings, perhaps if they turned their passion outwards instead of just
ranting and gushing to each other and at you, more of the world might know
about it and they might get more market traction and be greater catalysts
for competition and change within their industries.
Dear Open Source Community: It would appear that you suck at marketing.
Which makes it positively comedy gold that you are bitching at Hugh MacLeod
about the challenges and misconceptions you face… due to sucking at marketing. 🙂
Love,
XXXXX

My friend’s snarky attitude notwithstanding, I’m wondering what marketing problems Open Source DOES have. I know techies like to consider themselves relatively immune to “All that marketing crap”, however…