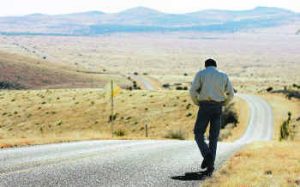 This is my sixth full day in Alpine. Here are some notes on my time here so far, in no particular order:

1. Alpine, population circa 6,000, is actually a pretty prosperous place as far as West Texas towns go. This is mainly due to Sul Ross State University, where my dad used to teach before he retired. Besides that, the main industry round these parts is ranching. 10,000 acres is considered a small ranch. Some ranches have over 200,000 acres.

2. My main daytime hangout in town is La Trattoria, a chilled-out bistro that serves as a coffee shop by day, with excellent, authentic Italian food by night. Owned and operated by Allyson Santucci [a great, strong lady].

3. Evenings I don’t go out much. I just stay in and talk to my dad. We’ve not seen each other in a few years, so it’s a good thing.

4. I haven’t been this chilled out and relaxed since…. ummmmm…. the last time I was in Alpine, September, 1999. Funny, that.

5. It’s not official, and I’m just going to play it by ear, but I’m thinking of making Alpine my permanent US base. A lot depends on how many gigs I get this side of the Atlantic in 2008.

6. If I ever end up living permanently in the US again, it’ll be here. Nowhere else.

7. “Located 3 miles East of Marfa, Texas on US Highway 67/90, the vineyard and winery are surrounded by awe-inspiring Desert Mountain Ranges. Our West Texas sunsets over the mountains are spectacular, and Luz de Estrella is perfectly positioned to take full advantage of them.” Apparently this is the best wine made in Texas. They sell their wines at Whole Foods Market, all over. I visited their winery earlier today. I was impressed. Not just by the wine, but also the fact that they have real Texas Longhorn cattle on the property.

8. My father is a trained geologist. Since retiring from his teaching gig, he’s been publishing his own books. He writes about the local geology. He actually sells a heck of a lot of them ’round here- simply because a lot of folk who visit here want to know more than WHAT the mountains and desert looks like, they also want to know WHY they look the way they do. And nobody does this better than my father. My good friend, Doc Searls, a geology geek, was reading his stuff even before he knew that we two MacLeod’s were related. Small world.

9. Yesterday evening, after spending the afternoon working in the library at Sul Ross, I popped into La Trattoria for an end-of-day glass of wine. In the corner was playing a FABULOUS acoustic four piece C&W act, called The Doodlin’ Hogwallops.  All young men, I’m guessing the average age was about 26. The lead singer, Neal, was a REALLY talented musician. Seriously. His original songs were just as fresh and inspiring as the classics he also covered. Though I make no claims to be a particularly gifted talent-scout, I found their act a truly moving experience. I hope you’ll check them out if you ever get a chance. I’ve already promised myself I’d tell certain friends of mine in the music business about them. Rock on.

10. Marfa, population circa 2100, the place made famous in the art world by Donal Judd, is the next town over from Alpine. Though it’s not a town without its charms, and for all its newly acquired, art-world trendiness, it seems a lot more run-down than Alpine. I can see why the filmmakers like using it as a cinematic backdrop. For some reason there it’s easy for a filmmaker to project “Godless & Bleak” through the camera lens, although I find the actual landscape in real life anything but. Apparently the New York and Hollywood crowd love to fly in there for the weekend, but weekdays I hear it’s a bit of a ghost town. Earlier today my father and I visited the town for lunch. He knows a lot of people there, who sell his books. Vicki over at The Hotel Paisano springs most to mind. She’s done a great job running the retail store there. This hotel, a local architectural landmark, was where James Dean and Liz Taylor stayed while filming “Giant”, all those years ago.

11. They say you can always tell the history of a place by their most prominent buildings. In Europe, we’re talking castles, palaces and cathedrals. New York we’re talking office buildings. In West Texas, it’s invariably the county courthouse. Historically, the establishment of Law & Order is a big deal here, and the more one knows of the local history, the less one is surprised. The Presidio County Courthouse in Marfa I find especially trippy, but in a good way, the same way I find Paris’ Sacre-Coeur pretty trippy etc.

12. This part of the world is full of real, working ranches, and real, working cowboys. The latter are an impressive lot in real life- I would not recommend messing with them. They’re a much different breed from the cowboy-hat wearing rednecks from my oil rig days, though I still hold lots of affection for the latter [I occasionally worked offshore in the Gulf of Mexico during my college days]. After all, cowboys physically wrestle with cattle all day long [a surprisingly strong, robust, and violent beast], so they’re not exactly intimidated by us city-slicker or “Urban Cowboy” types, truth be told. Waiting in the coffee line at La Trattoria yesterday morning, in front of me was a young cowboy getting his morning Joe. Seeing a real cowboy ordering a caffe latte is a real disconnect, somehow. You can tell they’re real cowboys five ways: 1. They’re built like oxen on steroids, with hands the size of baseball mitts. 2. They’re wearing spurs. 3. Their cowboy boots go over their knees. 4. They seem to have this uncanny combination of [A] a happily calm disposition, seamlessly mixed with [B] a palpable undercurrent of “I can, and will happily rip you in half, in less than three seconds, but only if I gotta”. Not a bad combo to have. 5. They’re surprisingly young. Like the movie says, “No Country For Old Men”.

13. West Texan interaction is all about mastering two arts. [A] Being genuinely friendly and courteous, especially to women, children and the elderly. [B] Speaking with as few words as possible. You need to be able to do both, and do them well, or else they look at you funny. Again, not a bad combo to have.

14. A nice two bedroom house in this town goes for around $100K or so. In London, you’d be lucky to get a tool shed for that amount. For someone seeking increasingly high levels of solitude, I find the property market here sorely tempting.

15. The big tourist draw in this neck of the woods is Big Bend National Park, which I’ve never been to before. 120 miles South of here, Dad and I are hopefully checking it out tomorrow. Watch this space.

My business partner, Jason and I were thinking, if people like our daily newsletter so much, it would be awesome to take what we’ve learned …

[“Burden”: You can buy the print here etc.] My old buddy from my early London social media days, Lloyd Davis has an Evil Plan. A …