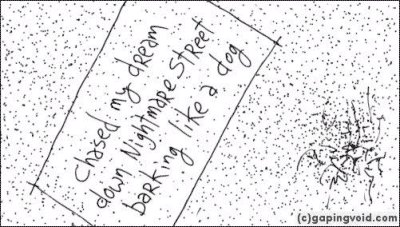 [RE-POST: Originally published August, 2004]
A strange thing happens to New York bartenders when they hit the age of thirty: They suddenly realize they’re never going to be famous.
Right up to the point where they were 29 years, 364 days, 23 hours, 59 minutes and 59 seconds old they are all absolutely, positively certain that their screenplay will be sold, their face will be discovered by a big stage producer, their paintings will be hanging at The MoMA, their photographs will be gracing the pages of Vogue etc. etc.
Then Boom! Within nanoseconds of the clock chiming Midnight on the morning of the Big Three-Oh, the dream is suddenly over. Crash. Burn. Dead. No more magic famemachine to lift their souls out of the lowly depths of bohemian hand-to-mouth living and into the higher realms of A-List parties and Central Park South apartments.
Of course, the first thing they do is panic. Holy Shit! I’m old! Despair! Despair! Utter Despair!
Then once the initial rush of fear and dread starts to wane, they decide it’s finally time to grow up and do something serious. Goodbye, Dream. Hello, Sensible Adulthood. Time to stop working for The Man. Time to strike out on their own. Time to be a grownup.
They look around for ideas to start their own business. But like everybody else alive, their search is limited by what they know. Besides their art thing (auditions, gallery schmoozing etc), they’ve only really been in one business since dropping out of college a decade previously- pouring drinks.
Bartending is the only job they know. The drinks trade is all they know.
So late one night, Bartender One (who just turned thirty) is having an after-hours beer with a friend, Bartender Two (who also just turned thirty). They’re both in mourning for their recently-lost youth. They are commiserating, trying to keep it in perspective, trying to focus on the positive. But now they’re also talking intently, talking passionately, thinking seriously, they’re figuring it all out, they’ve got to come up with an idea. They need a business idea. They need a plan. Suddenly…
Bartender One: “I know! Let’s open our own bar!”
Bartender Two: “Yeah! Cool! Let’s open our own bar!”
So they whoop and holler and dance around and hug each other, glowing radiantly in the sheer excitement of their new business plan.
Good thing nobody else in New York has thought of it yet.

AHH the sad death of ideals. They are harder to keep alive than orchids in the Arctic. But then that’s what separates the winners from the whiners.
I knew a bartender in Caspar Ca. back in the mid 70’s who had been a record company executive in Chicago until he was 40, then decided to buy this bar in Caspar. He only tended a few nights a week, after all he *owned* the damn thing. The regular bartender though had your epiphany and he was only 27. I think he went into logging though, not bar owning.

This strikes a chord, as someone who has worked on the web for years, and has just turned 30 (with fatherhood now following!).
I thought for years that I’d somehow stumble across a genius idea to turn me into a dotcom millionaire, in the same way as I used to dream about racing cars and motorbikes, or becoming a rock star…
It takes a while to realise that the overnight success stories you read about generally follow years of work and effort, and that there are lots of other people chasing the same ideas, inspired by the same overnight success stories.
Every time I read about the fact so many dotcom success stories are started by the young, I have to remind myself that they’re just part of the story, and that they’ve probably been working at their success for many years, and just started younger than the previous generation. After all, with internet access reaching an ever younger age, a 20 year old internet business entrepreneur can have 10 years experience!
It doesn’t mean that I can’t come up with a great idea – it just means that now I have more realistic criteria to judge it against, and if I do ever have a Eureka moment, it’ll be more likely to be a good one…whether it happens when I’m 30, 40, 50, or 60….

Takes me back to something you posted about not long ago Hugh. When do the dreams stop – and what happens after that point? Put my own thoughts down a few day ago…http://blendingthemix.com/2008/01/14/tinker-tailor-soldier-sailor-which-one-are-you/

I really enjoyed this post. Not to mention, I found the symbolism to reality quite uncanny.
As each year passes, more and more employees are beginning to realize just how mundane, limited, and insecure their current jobs are.
In an avid effort to match this emerging revelation, individuals are searching for business opportunities that can be relied upon should one be fired.
Not to mention, with the current economic downturn, being your own boss is becoming more appealing and attractive to the employed masses.
Journalist and TV host, John Daly, used his skill and experience to develop ‘The Real Money Show’, http://www.realmoneyshow.com, an invaluable online resource that reveals how to search for an online business capable of supplementing an income or even providing much desired financial security. You can email me for more info at [email protected]tv.
I hope anyone considering his or her options for an online business find this research to be of practical value.

You cynical bastard, you!

I think that just because you turn 30 doesn’t mean that you should abandon your youthful dreams. You can acheive your ambitions at any age.
I do, however, think that if all you are doing is tending a bar and waiting to be discovered, you’re not going to get there. Regardless of what you want, you have to be willing to work for it.
If you’re an actor who no one will cast, pull a Damon/Affleck, and write/produce your own. If you’re a director who no one will distribute, post your film on YouTube. Granted, you may not always succeed in the capacity that you dreamed of, but it’s better than pouring pints and hoping that the bum at the end of the bar is a casting agent.

Hugh, I really love it when you go to Paris & New York & drop these shrewd gems… it’s kinda like Revenge.

But wait. It happens to you again at 40 and again at 50. Every time you think you’ve got the answer, they change the rules. Thought you’d like a heads up.
Signed,
50 year-old poet who never read in Alpine

But wait. That’s why I entitled it, “Allegory” 😉

In 2001 at the age of 30 Lance Armstrong wrote:
“Without belief, we would be left with nothing but an overwhelming doom, every single day. And it will beat you. I didn’t fully see, until the cancer, how we fight every day against the creeping negatives of the world, how we struggle daily against the slow lapping of cynicism. Dispiritedness and disappointment, these were the real perils of life, not some sudden illness or cataclysmic millennium doomsday. I know now why people fear cancer: because it is a slow and inevitable death, it is the very definition of cynicism and loss of spirit…”

Too bad they didn’t know the way to San Jose.