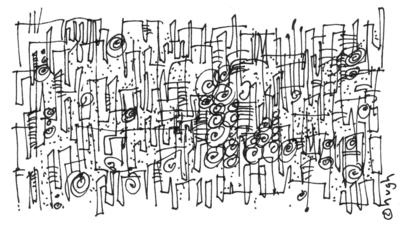 [Listen to the podcast here.]

Rabbi Pinny Gniwisch of Ice.com, Marketing contrarians Johnnie Moore and Mark Earls, plus myself gathered together over Skype for our second “Hugh & The Rabbi” podcast. We started talking about “Influencers”, in the marketing sense of the word. We ended on something far more interesting. A good time was had by all.

The Minutes:
00.32. Today’s show is about “Influence”. How clients imagine that there are these secret “Levers” out there, and all a client has to do is sign a check to make the marketer magically pull it.
01.30 Mark: Talking about how things go from being minority popularity, to majority popular. One school of thought places high degrees of emphasis on reaching “Influencers”. Another school of thought places greater emphasis on a high degree of “Random Acts of Traction”.
3.25 Hugh: All a marketer can do is create lots of opportunities where “Random Acts of Traction” can happen.
03.35 Pinny: How can you tell me that you’re going to create an uber-widget for me, when you’ve already admitted that your one big success story came down to luck?
04.10 Mark: Who wants to go into a meeting with a big client and say, “Most of this, by the way, is just chance”…? Most of us want to say, “I’ve got the secret sauce that’ll give you the edge…”
04.40 Johnnie: Paradox: Being primates, we’re all hardwired for fair play. Yet we all want to be the one with the unfair advantage.
05.35 Hugh: “All is vanity.”
05.40 Pinny: Success is 5% wisdom, and 95% luck. If it were the other way around, we’d all be a lot happier.
07.00 Mark: On creating one’s own luck: The one thing the great minds of the Twentieth Century all seem to have in common was: a very petit-bourgeoise work ethic. “You have to be there, working at your desk, when a random act of Luck comes your way”.
08.20 Pinny: The ones that influence the world are the ones who show up; the ones who are there. Anyone can create a “Vessel for Blessing”, but you have to “be there” in order to do it.
09.00 The “Influential” model is most often touted by people who would like to be seen as “Influentials”, or at least, “Friends of Influentials”.
09.30 Mark rants about “Cool Hunters”.
10.00 Johnnie: Group behavior in assessing music varies WILDLY, depending on whether people in the group are being observed by other people in the group.
11.00 Johnnie: In marketing, the order of events we post-rationalize is much, much more random than we realize, let alone admit.
11.30 Mark rants on about the record business.
13.15 Johnnie: The futility of trying to out-think the market.
14.00 Johnnie: One has to be “in the moment” [to use the Buddhist phrase] in order to truly understand the market.
14.25 Pinny: Being “present” is what truly creates sustainability. That, and staying “humble”.
15.05 Just because Malcolm Gladwell is wrong, doesn’t mean Mass Marketing is right.
15.40 Hugh talks about Russell Davies: Successful brands don’t do “One Big Thing”, they do lots of little things.
17.00 Hugh talks about the “Blessing and the Curse” of when things go viral.
18.30 Mark: It’s far more sensible to try lots of different LITTLE experiments, than try to put all of one’s weight behind the ONE BIG IDEA.
20.05 Pinny: Companies have to be not top-down, or bottom-up in order to be creative- they must be “sideways”.
21.10 Johnnie: Companies have to be Peer-to-Peer [i.e. “Sideways”], not top-down or bottom-up. People find it hard to work together without hierarchies.
22.00 Hugh talks about meeting Tim Burton in 1989, and how he described directing movies.
24.00 Pinny: Companies that allow Peer-to-Peer will flourish. The dialog rabbis have with their congregants is much different than it was thousands of years ago. Far more peer-to-peer etc. “Over time, the big answers never change, but the big questions do.”
25.00 Pinny: Kids are much stronger “consumers” than they were 100 years ago. Their questions get bigger.
26.12 Hugh: The reason Web 2.0 is so “charming” is that what drives it at its core, is a lot of young people, “Just trying to build and share cool stuff with their friends.” Apps are built around pre-existing relationships, not trying to create relationships. For their own sake.
29.30 Hugh and Pinny talk about the diamond business. “It’s not the rock that’s interesting. It’s that Tom and Jill love each other and are getting married, that is interesting”. Getting the product to “Transcend its own utility” is where the action is.
31.00 Mark talks about how Web 2.0 shows us so much about our real, “Social Ape” selves, not our “Scientific Marketing” selves.
32.50 Hugh talks about Euan Semple’s thesis about “Love” being the main driver of Web 2.0.
34.40 Pinny: The Five Levels of Mysticism. How as time goes on, we get deeper into the soul. Society is getting deeper in the spiritual level.
36.40 Mark talks about getting away from business being seen as a mechanical thing, towards something more based on “Belief”. The companies that excite us the most are not “just about the metrics”. People need “Belief”, both as individuals and as members of groups.
39.30 Hugh: “Sing like you mean the words.”
39.45 Johnnie tells a great story about the actor, Charles Lawton. “I know the psalm, but she knows the Shepherd.”

41.15 Mark tells a great story about a theater group. “Even when nobody is watching…”
44.15 Mark talks about the great 1973 Barbarians vs All Blacks rugby game, as a metaphor for achieving greatness.
46.50 Pinny tells a story about grabbing a dropped scroll while crossing the street in heavy traffic. A metaphor for “Always being on”. Being transparent means “Always being on”. Hugh: “When you’re in that state, you are in a State of Bliss, a State of Grace.”
49.43 Finis.

Thanks to Todd Schnick and for having Seth Godin and I on his Intrepid Radio Podcast. We started off talking about the children’s book Seth …