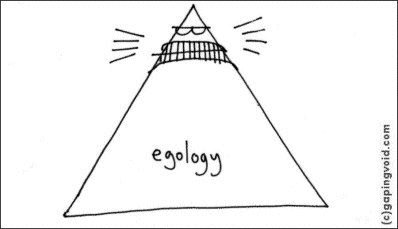 My old advertising buddy, Dave Everitt-Carlson, who started working at Leo Burnett in Chicago the very same day as me, countless years ago, just wrote a book about his expat adventures in Asia. One passage really got my attention:

During my time in Korea it was relayed to me that Burnett Chicago had a shot at the Microsoft advertising account. Having created icons for some of the most prominent brands in history, Marlborough, Kellogg’s, McDonald’s and the Keebler Brands to name a few, it seemed only natural that Burnett would desire the Microsoft name in their stables, not to mention the billings.
As the story goes, Bill Gates visited the agency and was treated to a pitch owing to the spirit of P.T. Barnum. Creative teams showed storyboards, sang songs and put on a show extraordinaire, in keeping with the finest Burnett traditions. After the pitch Mr. Gates was reportedly treated to the customary agency tour, replete with aisle upon aisle of pristine offices looking more like those of a Japanese bank than an American creative powerhouse.
At the end of his tour I was told he exclaimed, “Excellent presentation gentlemen, but as I see it, you don’t use computers and that would make it impossible for you to understand my business.”

I wasn’t at that presentation, nor can I testify to the veracity of what Mr. Gates said, but it would’ve been would’ve been early 1990s [My office still boasted a working IBM typewriter back then]. One world ending, a new world just beginning, and the people caught in the middle not liking either side of the deal, much.
And now many I’ve spoken to are wondering if Microsoft is having the same problem I saw Leo Burnett having all those years ago. As fond as I am of the groovy cats in Redmond, hey, I was also fond of Leo Burnett once, and still am. Apparently Burnett has done very well these last few years by finally understanding that their business, like their clients, was now global, not American Midwestern. Rock on.
It’s easy to say in a meeting, “The world is changing, and we need to change with it”. And just as easy to get everybody in the meeting to agree with it. What’s harder is what happens after everyone has left the room. When everyone has to worry about keeping their jobs.
Personally I am hoping Microsoft carries on happily for the next thirty years. Two things have to happen, as far as I can see:
1. Like the Blue Monster says, Microsoft has to get better at telling their story. In the grand scheme of things, that’s actually not difficult, once you’ve REALLY decided to do that.
2. Microsoft’s current schtick is, “Unless we can get 75% plus of the world’s computer users buying our product, we’re not interested.” I think if they could change their schtick to, “Unless we can get 75% of the world’s computer users LOVING our product, we’re not interested,” I think they will do just fine.
I know, I know, if the latter were easy…
This is why I’m watching the recent Microsoft offer to buy Yahoo with great interest. To me, this is not just about “Search” and “Taking on Google”. Like I told Dave Winer after reading his wonderful post on the subject, “The thing that might save MSFT long-term is a massive infusion of Silicon Valley DNA. That’s why I think they’re offering Yahoo the $40billion.”
All companies, no matter what the size, have a their own, unique cocktail of four different forms of capital- Financial, Intellectual, Technical and Cultural. Microsoft is relatively fine with the first three. But in the next few years, it’s with Number Four that the really BIG problems AND BIG opportunities will show themselves.
[Update:] Another Burnetter I knew back then just e-mailed me: “I wasn’t at the meeting either, but the story you reference is the story I heard.”]

[Disclosure: I consult occasionally for Microsoft, like I am for this upcoming Office Developer’s Conference next week.]