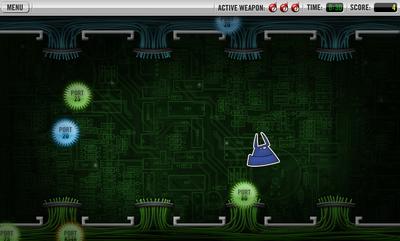 [Click on image to enlarge]
Like I hinted in November, The Blue Monster has turned up in a video game. Ryan Anderson from Fuel Industries in Canada sent me the following update:

Just wanted to let you know that Microsoft Technet promotional game with the Blue Monster cameo appearance is now live at http://www.server-quest.com. He’s part of the second mini-game called “Packet Invaders.” You have to stop a security breach by blowing up the bad port requests and keeping the good ones. When the Blue Monster appears in the bottom right, you can click on him and he’ll chomp across the screen and destroy any of the dangerous ports.
We’ve created a video showing him in action.
There’s also a trailer for the game itself on MSN Video.
I hope you get a chance to play the rest of the game as well – there are a lot of hidden jokes and references throughout the levels. We had a lot of fun creating this, and I’m very happy that we were able to integrate the Blue Monster into it somehow. Hopefully next time, he’ll get a bigger role.