Home » Blog » the social marker- the "social object" on steroids 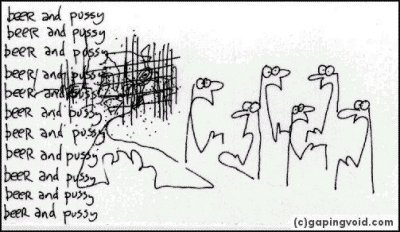 You all will be familiar with my writings on Social Objects by now.

Increasingly I’ve been using a term, “Social Marker” to describe a certain type of Social Object. I’ve found it especially useful for explaining certain ideas to marketing folk.
When two people meet, the first thing they try to do is place each other in context. A social context. So they insert some hints into the conversation:

“I used to know your Uncle Bob.”
“I work at Saatchi & Saatchi’s.
“I’ve been reading Malcolm Gladwell for years.”
“I’m a member of Soho House.”
“I was reading Doc Searls’ blog the other day.”
“I was college roommates with your ex-girlfriend.”
“I was sampling some fine Islay single malts the other evening.”
“I bought some Versace shirts from Barney’s last week.”
“You’re a Red Sox fan too?”
“I think Andy Warhol is overrated.”
“I think Led Zeppelin is underrated.”
“I was having dinner with some guys from Goldman Sachs.”
“My wife thinks the Upper West Side is really good for schools.”
“San Tropez is too expensive in February.”

Let’s say, for sake of argument, that you never heard of me before, but I knew all about you. And let’s say, for example, you were also the world’s greatest Boston Red Sox fan. And let’s say I saw you in a coffee shop. And let’s say I went over to your table, like a stalker [You don’t know me from Adam, remember].
And let’s say the first thing out of mouth was a short list of five names:
“Carl Yastrzemski. Carlton Fisk. Rico Petrocelli. Fred Lynn. Dwight Evans.”
Yes, granted, that would be pretty strange behavior. That being said, because you knew every single factoid about the 1975 World Series there was to know, you would know exactly who and what I was talking about. Right away, you would know that we shared a context, even though I had only given you five names and nothing else. Which would make you more likely to invite me to sit down at your table and start a conversation.
Every ecosystem has its own, unique set of social markers- nouns that serve as social shorthand, stuff you use to let other people know ASAP that you know what you’re talking about, that you are a fellow “citizen” in a certain space.
When I visit San Francisco I am always surprised how often the name of my friend, Robert Scoble comes up in random conversation, unprompted by myself. Why is that? Why is he so well known? Is his blog REALLY that good? Is he REALLY that smart and interesting?
Well, I could give a whole stack of reasons to explain why I think Robert’s success is well-deserved. But one major reason that his blog’s traffic is so high, and his name so well-known, is that his personal brand has somehow managed to become a Social Marker inside the Silicon Valley ecosystem. The same could also be said for Mike Arrington, Loic Le Meur or Mark Zuckerberg. Dropping their names into random conversations allows people to quickly and efficiently contextualize themselves.
Something similar happened to me a couple of years ago. A artist friend of mine was hitting on a girl, another artist, in a bar in New York’s Lower East Side. For whatever reason, the subject of “Art and the Internet” came up. So my friend started telling the girl about this other friend of his, this guy living over in England, who drew these weird little cartoons on the back of business cards…
“That is SO unoriginal,” the girl interrupts, rolling her eyeballs. “Who does he think he is, Hugh MacLeod?”
Heh. Small world. Yes. She was using me as a Social Marker.
Social Markers are a prime form of social shorthand, that people use to STAKE OUT the ecosystem they’re occupying. So why do I find this such a useful term for marketers? Because obviously, if your product is a Social Marker in your industry ecosystem [the way the iPhone is in the mobile world, or Starbucks is in the coffee world, or Amazon is the book world, or Google is in the search world, or Whole Foods is in the supermarket world, or Virgin is in the airline world, or English Cut in the bespoke world etc etc] you will have an AMAZING competitive advantage to call your own.
And if the product your company makes is not a Social Marker, I guess the first question would be, “Why the hell not?” Quit your job and start over.
[Update:] Neal makes a really good point in the comments: Really interesting thought, Hugh, but bad products could also be a social marker – “ah, yes, I was ripped off by that building company too” or “oh – you’ll be disappointed by that mobile phone as well”. I’d suggest there’s also a variable here about positive v negative that you should think about before quitting that job 🙂
[Bonus Link] US News & World Report: “Selling in a Post-Meatball Era- The quest for ‘social objects’ that create their own Web buzz.” Seth Godin in a great interview to plug his new book, Meatball Sundae. “Social Object” given a small mention etc.

Thanks so much to Babson President, Dr. Kerry Healy (Mitt Romney’s former Lt. Governor of Massachusetts) to come by my “I’m  Not Delusional” show and …

[One of my favorite Jedi mind-tricks of recent times: The “All-Over” I did for Cisco Cloud. Click on image to enlarge etc.] It was just …