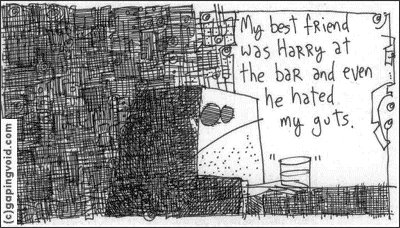 Four years ago, I wrote one of my “How To Be Creative” chapters, “Dying Young is Overrated”.
Andreas Duess, a Toronto-based advertising creative, left a comment there I liked so much, I never forgot it:

I used to live in Hoxton [East London], when Hoxton was still full of artists, rather than bankers. Studios, workshops, warehouses. We used to operate rooftop cinemas, the pubs stayed open all night. The ‘Blue Note’ had just opened on Hoxton Square. It was cool, it was creative, it was happening. It was awash with coke, speed and pills.
Taking drugs was the normal thing to do, not the exception.
Now, ten years later, there are two kind of people who were part of that circle: The ones who jumped off that train. They now run hotels, live in France, own start-ups, work for MTV, do interesting stuff.
And there’s the other ones. The ones that are still alive, and many are not, are busy drooling in a forgotten pub in the East End. Dreaming of better days. Royalty payments have dried up, so has the talent. Anyone remembers the rabbit scene from ‘Snatch’? Like that, ‘proper fucked’.
Drugs don’t give you consciousness expansion. Drugs turn you into a self obsessed ranter, full of conviction on the outside and full of hot air on the inside.

Actually, my fellow-artist buddy, John T Unger also left a great comment there. This was quite a while before we actually became friends:

Hemingway had a great article he wrote for the Toronto Star on the same subject…He admonished American tourists not to bother making trips to Montparnasse to drink with the great artists of the day, because they would all be in the studio painting, rather than wasting their time at the bar. He went on to say that the tourist would not lack the company of plenty of B list wannabes if he was thirsty, with whom he could sit elbow to elbow and bitch endlessly about how famous he wasn’t and how unfair it all was. The article was funny, mean and true (like some other people we know, eh, Hugh?).

Yeah, I’m spending a lot of time these last couple of days, sifting through old material. I’m working on a new project, and some of the old stuff should come in handy. Groovy.
[Pimp Central:] Have you checked out John T Unger’s “Great Bowls of Fire” sculptures? They utterly rock. Oh, and he designs websites.