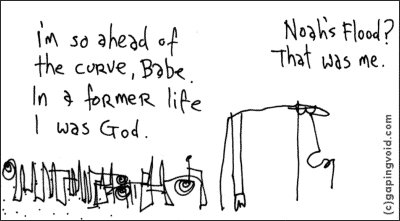 It’s now a well-told story. Krispy Kreme doughnuts came out of nowhere, attracted a cult following, spread like wildfire, got over-exposed, then collapsed under its own weight. When I could only get them by making a half-hour pilgrimage across town, I went there all the time. Once they became readily available in my local corner deli, I stopped eating them.
When I was a little kid in central Massachusetts, there was this local, old-style dairy named Pinecroft, that served the best ice cream ever, but only during the summer months. Then the dairy got sold to a bigger company, and the next thing you know they were serving ice cream all year round. It never tasted quite the same after that.
Rosé tastes a lot better in the South of France than it does in London, no matter how much you’re paying.
Lobster is considered a real delicacy, expensive stuff. Back in the 19th Century in New England whaling towns, local boarding houses often had the following sign outside them, in order to attract the sailors’ business: “Lobster only served 4 days a week!”
I only listen to my CD of King’s College Choir during the Christmas holidays. It preserves the magic.
Scrimping and saving over many months for a $4000 English tailored suit is a much more uplifting experience than buying an entire wardrobe of them with a single swish of a diamond-encrusted credit card.
I rarely eat Barbecue, but it’s usually the first thing I head for when I travel to Texas. When I travel to different places, I always like to sample the local fare. I once tried eating Mexican food in Geneva. Never again.
Though they produced all three Lord of The Rings movies at the same time, they made you wait a year between installments. People flocked to see them all.
One of the things I am most looking forward to in 2008 is the final season of Battlestar Galactica. It will be well after summer till I see here in the UK, on DVD [I don’t own a TV]. I’ll probably buy it the same day it becomes available, and I’ll probably watch the entire series in a single, marathon session. I can’t wait!
Back when Kathy Sierra was blogging, she wouldn’t post very often. Every two weeks, perhaps. But BAM! when she wrote, it was stellar stuff. A real treat to read.
I guess you can already see where this is going: People like treats. People are indifferent to commodities, even when the quality of the latter is high. Your downfall begins the minute people no longer have to wait in line in order to get your product, the minute they no longer perceive it as a treat.
[Update:] David St. Lawrence makes a great comment below: “When they are no longer social objects, they are no longer interesting.” Exactly.