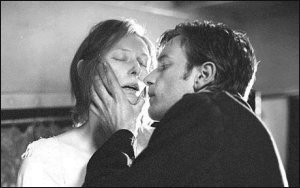 (Tilda Swinton and Ewan McGregor in “Young Adam”)
Four years ago, I had a go at “blog marketing” my old friend Dave Mackenzie’s film, “Young Adam”. It went on to achieve cult status, though not for any reason that I could honestly claim credit for. From April, 2004:

Tilda Swinton, the female lead in Young Adam, and I swapped e-mails recently:
Dear Tilda,
I am trying to help my old friend Dave with his film, Young Adam, by promoting it on my website. I thought asking one of the actors about it would be a good idea, hence this e-mail. Thanks so much for helping out.
Here are the questions I’ve prepared, I’ve tried to keep it short:
1. David never made a feature film before. But here’s you, an internationally well-known actor with a superb reputation, turning up in a debut. Was it an easy sell or did you need a lot of convincing?
2. As an actor, how did you rate playing the part of Ella, the main female lead? Was it a particularly challenging role for you? I imagine it would be quite hard to pull off the very sexual side to it, while also maintaining that grim, joyless, hard edge that Ella had.
3. Both Trainspotting and Young Adam, the two big Scots films of the last few years, are both pretty bleak and existential in nature. Do you think that was coincidence, a sign of the times or a unique symptom of the Scots character?
4. Final Question: How do you find the Americans reacting to the film (the ones who have already seen it, anyway)? I imagine it flies against their perceptions of Scotland quite noticably, even more so than Trainspotting.
Thank you very much,
Best,
Hugh

This comes from a plane from San Francisco to Denver on the all-kicking Free World tour of Young Adam .. David is beside me reading W .. they are bringing us ‘shrimp’, sauteed and laid over ‘mescalin’, apparently ..

1 Very little arm-wrestling needed to get me into this agreement to make the film with David. His script was so impressive .. but more: it made me want to talk to him about the film it promised he wanted to make .. once we started talking, we never really stopped .. but the fact that he, or any filmmaker, had no track record would never really figure as a disadvantage for me .. if anything, it’s a thing I know very well, the working with first time, or relatively inexperienced, filmmakers – Susan Streitfeld, Sally Potter, Robert Lepage were all in that category .. since Young Adam, I’ve worked with Mike Mills and Francis Lawrence, both first time feature filmmakers – there is a sort of beginner’s mind about people with that fresh vision and atmosphere of adventure .. and absence of battle scars ..

2. All tasks have their particular challenges: my playing Ella had these: that, given the neo-realistic verite sort of atmosphere of the environment, it was clear that the task meant sinking myself into the world of this working class, 50’s, Glasgow with as much accuracy as I could. I had a voice, and a way of moving, to find that meant that Ella felt authentic and not enacted. That meant a kind of heaviness in the limbs : in the book, Ella is very specifically and evocatively described as being large and fleshly .. David and I intended that I should be fatter than I am naturally to express that sort of living flesh thing for Joe .. but I found it impossible to get there, so we went for a different kind of lumpenness – something to do with a rawness and a slumping shape, a slackness of body tone and a Stanley Spencer skinny/bruisedness .. Ella’s story is so much the story of her body: what it signifies to Joe and how she learns to live in it .. once we had rooted her shape and energy in that way, it became easy to tell her story ..

3. I happen to see what you describe as bleak and existential as a particularly Scottish melody .. not the ONLY one possible, but a speciality, you could say .. certainly in terms of Scottish film, as in our culture in general, I do believe that our roots and tendancies have always married better with an internationalist, specifically European, tradition, than the English cinema’s close relationship to the theatre and to the American market pressure to sell its identity through class and romantic comedy ..

4. We can tell you more after the film opens on Friday about the American audience’s reaction to the film .. but so far, the journalists we have been speaking to have been extremely supportive and respectful and not particularly surprised .. no one has yet mentioned the lack of castle locations or caber tossing, but we are not in Denver yet, so we’ll keep you abreast of all breaking news ..

(Young Adam premiers this Friday, the 16th, in the US. Cities include: New York, Chicago, LA, Denver, Dallas, Minneapolis etc.)

Of course, the thought that’s going through my head is, how much the Internet has changed since then. And all for the better, if you ask me.
[The Young Adam DVD is here on Amazon. Highly recommended. But I would say that.]
[Yes, “Young Adam” is very much a Social Object etc.]

Thanks so much to Babson President, Dr. Kerry Healy (Mitt Romney’s former Lt. Governor of Massachusetts) to come by my “I’m  Not Delusional” show and …

[One of my favorite Jedi mind-tricks of recent times: The “All-Over” I did for Cisco Cloud. Click on image to enlarge etc.] It was just …