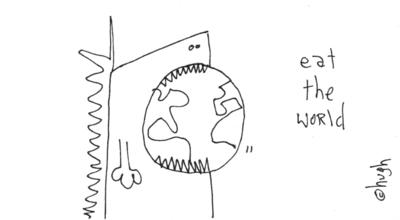 It’s been a big week for TV 2.0.
First, I wrote a blog post about Microsoft’s intentions within this space:

Whatever TV becomes in the next century, Microsoft wants to own it. Or at least, own a huge chunk of it. And that battle will be fought and won [or lost] sometime in the next decade.

It’s all about pictures…
Pictures from your Flickr contacts…
High-def pics from professional photographers around the world…
Your family and business associates…
All ready for your new Mac Mini and high-def TV.

And then Robert Scoble Scoble wrote about Flickrfan:

But we all notice a trend: hooking MacMinis up to your HTDV. I think it’s a revolution. Revolutions always start small and among the weirdos.

Great stuff. Mac Mini + TV. The Glorious Revolution for 2008 etc.
Funny, it turns out Jon Husband was writing about the same thing in January, 2006:

While always discreet about its future projects, we are waiting for Apple to unveil in 2006 a media computer … the Mac Mini Media.

Hey there Hugh!!
I think Chumby might be part of this too.
Its screen is a little small, but it looks good on a night stand.

What’s most interesting to me about FlickrFan is the idea of getting HDTV to embrace the Internet.
FlickrFan isn’t there yet for end users, but can’t you imagine people subscribing to your cartoons and having them show up on their television – or maybe creating a new type of cartoon for the Internet television platform?
There’s a lot of potential for the idea of an open Internet television platform.
Here’s another take on it: FlickrFan turns your HDTV into an Internet platform

It’s going to be a big year in Chez Cooke for streaming media around the house.
I also hear Cisco are working on a social networking maship for digital photoframes. You put your photoframe in a social network and then as you share photos from your desktop PC they get shared to the rest of your social network, whereever they may be in the world.
For someone like me who lives in a different country to the rest of my family this is what I’ve been wanting as the next (logical) step. Soon I’ll be able to buy them a digital photo frame, and automagically display new photos on my mum and dads photo frame from the comfort of my own own !
Now thats Rock On !
Nige

Hmmm … now they’ve got their distribution network in place, what would stop Chumby just doing a version without a screen but with an output to the HDTV?

And, of course, if Dave’s FlickrFan takes off. It really won’t be hard at all to upgrade it to do video, and then river of checkbox news.
If I was, say, Fox or CNN (or even the BBC) I’d be paying very close attention to this.

Probably not quite open platform enough for this conversation, but if Apple would add Flickr access to it’s current YouTube access, AppleTV could serve a similar function.
AppleTV is the one product from 2007 that’s changed my leisure time the most, particularly as it gives me the ability to watch video podcasts and DVD backups from the comfort of my couch.
Looking forward to an AppleTV upgrade at MacWorld.

Opening up Apple TV and iTunes would be a good thing.
I just noticed a new Cisco television advert last night … Cisco is starting to promote “Cisco Telepresence”, using one’s television with a webcam on top as a means of of doing live video chat using your HDTV as the screen.

The other day I was playing the Wii with my kids and found it has a better web browser on it’s internet channel then my iphone. (it plays flash too) But it was pretty cool bringing up a gigantic picture of the lava blooded volcano monster, Elemento from one of my recent updates, really big on the screen. I see Wii also has a photo channel I haven’t played with much, but I might go check it out.
Here’s something I did notice… if big HD tvs are the new platform, the only problem is that the homes that can afford them only have ONE, so if that one HD becomes a little internet hub, suddenly parts of families who want to watch HD movies are fighting over tv time– are we getting to the point where every kid will need an HD tv in their rooms?! 3 per house? UGH!

You really become better! I was disappointed a while ago but now it really becomes a very cool blog again! Thanks for so much inspiration!
best,
Anna

I’m convinced now that the ‘third world’ will have to invent its own version of world 2.0. I don’t know if any of you realise but all this is so american that it’s unreal for most of the people around the world. I thought the web was supposed to bridge the gap and make the world a ‘global village’ (if I may use that stupid phrase), but it seems to me that the natural way forward is for the gap to widen. I am heavily inclined to create an alternate virtual reality for the rest of the world. And something tells me it’s about time to start work on it.

“parts of families who want to watch HD movies are fighting over tv time– are we getting to the point where every kid will need an HD tv in their rooms?! 3 per house?”
I think there’s no doubt this will happen. LCD screens are very inexpensive now, will continue to become lessexpensive, and are the default for computers, tvs and any other place(s) screens are needed now.
You can be almost 100% sure that they will become cheap enough that unless a family controls how many the family acquires, there will be one in each person’s room (plus the kitchen and bathroom). UGH ! is one way of looking at that situation, for sure.

There is some distinctions to be made, IMHO.
Microsoft’s TV is much more towards an interactive TV over the Internet. That includes traditional TV or pay-per-view. The thing is that the PC and the Telly converge. We already have Media center PC’s, right? THey are PC’s that sit in your living room, with a remote control, and you use them for watchin telly, DVDs, listening to music, be it your traditional CD or your MP3 collection….
As for using the Internet on your telly, I am already looking at Flickr’s pictures from my couch on the telly after I’ve hooked the Nintendo Wii to the home wireless…
What is clear is that those technologies are all converging…