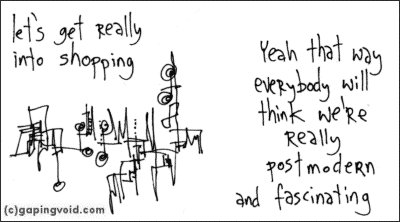 This topic is so last century (as Steve points out). People always want to know ‘where’ Microsoft will move next. But, Microsoft has always been very transparent about its aspirations and vision: ‘A computer in every home and on every desk’. The key word is ‘computer’. Wherever the ‘computer’ goes, Microsoft will seek to go to provide commerical software to support them. Into the datacentre, on the road in phones, in cars and yes, in the living rooms with TVs and consoles.
TVs are interesting because (a) they are still underserved by software to enhance the experience (though DVRs have changed that a lot, there is still a lot of debate how much software which adds inter-ACTIVITY can enhance a largely passive, ie. inactive experience), and (b) they are a popular electronic device for the digital Late Majority (but if anything the GenX and GenY folks are watching less TV than ever).
Hugh had it right months ago. The interesting story is not about the ‘where’, it’s about the ‘how’, ie. Software+Services.

Sometimes I think that when TV 2.0 comes along, it actually won’t have any TV component in it. Just as “Horse 2.0” [i.e. the car] has no actual horses.
Having given this some thought over the last couple of days, I feel myself shifting my thinking away from “The Box”.
I’ve been using computers for twenty years or so. And all along, I’ve tended to think of computer in terms of “boxes”. A box on my desk [PC]. A box in the cloud [My dedicated server]. A box of music in my pocket [My iPod]. Another wee box to phone people with [my Nokia]. And when it comes to living room entertainment, we have boxes all over the place [TVs, stereos, DVD players etc.]. With clever little wires to link all these boxes up. A personal network of boxes, as it were.
It wasn’t until I saw the Microsoft Surface console in Paris that I really started started thinking [PLEASE excuse the pun] “Outside The Box”. Do we really need all these boxes? Or at least, do we really need so many of them? Perhaps the barriers that separate everyday objects from software are woefully artificial?
Apple is a company I really like. I own both a Macbook and an iPod. They do indeed make lovely boxes. But ever since I saw the Microsoft Surface, it’s where “The Box” ISN’T that has become so interesting to me.
[AFTERTHOUGHT:] “Ubiquitous Software Equals Ubiquitous Media.” Advertisers, take note.

Hmmm … why do you keep calling this “Microsoft’s Big Idea”?
Yep this is happening. Because we now have Wifi and Bluetooth and packet-switching cell-phone networks it’s obvious that the computer is going to blow apart into a swarm of connected devices (Nabaztags, Chumbies, Robosapiens and Roombas) all conducted and co-ordinated via Wii controllers.
I see Microsoft “supporting” this OK. (Eg. robotics and home automation SDKs for developers on http://blogs.msdn.com/coding4fun/archive/tags/hardware/default.aspx ) But I don’t see them *leading* this trend any more than dozens of other companies. Far less that it’s their “big idea”.

Phil, it’s easier to think of it as a “big idea”, not as a breakthrough new idea to sell to the world, but as what Mark Earls calls a “Purpose-Idea”, something to galvanize the company around.
“A portable music player that people like” is not a big idea, in and of itself. Unless you’re the Apple iPod. Then it becomes a HUGE idea.
i.e. “How” is more interesting than “What”.

When Microsoft rock up with a new game, a fresh new hot pie of their own rather than a share of one the market baked, that is when they will have found that big idea, that skyhook to hang success on. The world isn’t a zero sum game anymore, at least not in anything where a business model depends on artificial scarcity anyway.
MS Surface is just tinkering with the computer box, same as the iPhone was just tinkering with the mobile phone, very cool tinkering that enhance the touchy feelies of how we work the boxes. Surface isn’t a big new idea, not even in terms of it’s market, buying aQuantive again, in the grand scheme of things not a big new idea either, so outwardly I don’t think they’ve cracked it just yet when it comes to being authors of the future.

Just out of curiosity, which Macbook and which iPod do you have?

I think you nailed it: TV 2.0 may appear without any actual tellybox component.
One law of marketing is that of divergence, which goes against all logical thought that things will converge. But divergence is all around us. That is why you have so many boxes around you.
Somebody needs to create a new category which soaks up all these boxes – not in a convergent device (which does lots of things poorly) but with a brand new category which does what all those other boxes does but does it singly and does it well.
That somebody could be Microsoft. Surface could be the category. Pigs might fly.
You see, isn’t “touchscreen” like videophone? Been around for decades and yet, for some reason, it’s never really become great for anything?
The explanation can be found, for example, at the channel tunnel, where queues are longer due to dirty touchscreens producing delays (thus driving customers away and providing tech support with more “stupid user” anecdotes).
Surface is good for … what? Now, what does Surface do that is the killer app? Advertising? We have billboards for that – some billboards don’t even require a power source, imagine that! All the “object recognition” is second only to Microsoft salivating over advertising revenue? Surface is already doomed.

At the same time Apple introduced the iPhone, they dropped ‘computer’ from their name – while there was a lot of hand-wringing at the time about their focus shifting from computers to consumer devices I think for them it simply was an acknowledgement of the move away from the ‘box’. When we say ‘computer’ we mostly think of the box that holds our files and gets us online; meanwhile the computers we are using more and more – cellphones, DVRs, navigation systems, media players, etc – don’t count as computers in the minds of the general public. The ‘next big thing’ is simply the diffusion of computing throughout our environment, but it’s tricky because as this happens the ‘computer’ is disappearing and I have a feeling we’ll only see what the shift clearly when looking back from the other side.