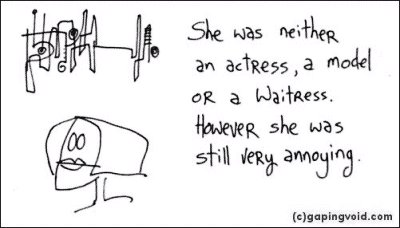 I’ve been watching the American TV writer’s strike with great interest.
Back in 1999-2000 I spent 5 months in Hollywood, helping a friend out with his “New Media” dotcom [The latter failed miserably, of course, but that’s another story]. Having seen the Media landscape evolve so dramatically since then, I have some thoughts on the dispute:
1. What struck me most about living in LA was how nobody talked about “Art”. They wanted to talk about “The Industry”. Somebody you knew getting a job on the set of Spiderman 3 or Stuart Little 2 was considered hot stuff… even if they were not films you or anyone else you knew would ever want to see yourselves [i.e. even if the movie was kinda lame]. And the equivalent existed in the TV world.
It didn’t take me very long to figure out: Hollywood is a factory town. In terms of social hierarchies, it was no different that Detroit, only instead of Ford and GM, we had Universal and Disney. And the guys I knew in it, for all their flashy cars and expensive gym memberships, were nothing more than glorified factory workers. Working on an assembly line. Shipping widgets [in the form of “movies” and “shows”] off to theaters and TV stations around the country. And indeed, they had EXACTLY the same kind of industrial alienation from their craft as the factory workers that Marx and Engels wrote about, over a century before.
2. For all the different kinds of “creative” people in the system, Hollywood has the most rigid class system I have ever encountered. With “The Players” at the top [Spielberg, Lucas, Brad Pitt, Angela Jolie etc], the grunts and the unemployed “Talent” at the bottom, and in between the middle guys: Writers, lawyers, agents, techies, all engaged in a massive cat-fight to get on top, or at least, get on top of their current peer group. It was a very well-mapped-out pyramid. Which is what made meeting people such a foggy experience. They knew that if you could figure out where on the pyramid you lay [not a hard thing to do in under thirty seconds], they’d feel exposed and vulnerable. And the writers I knew, for all the yakkin’ I heard about “the integrity” of their craft, were as every bit as complicit in preserving the pyramid scheme as anyone else I met.
In a recent Twitter conversation, Loren Feldman said to me: “I did 10 years in Hollywood, it’s a system based on fear, always has been.” I agree. And I think it will always be thus. Without fear, Hollywood has no viable business model. Without a large group of young, hungry people willing to take the pyramid/privilege model seriously, Hollywood has no business model. Privilege and fear are never far from one another.
3. In the last 20 years, we’ve seen an evolution of non-print Media away from “Theatrical” [Both cinema and TV are forms of theater], towards interactive. And the main consequences of that, besides media becoming a two-way conversation instead of a one-way conversation, has made the barriers to entry into creating “Media” a lot lower. And the people who are feeling the pain are the ones who spent the last decade or so trying to figure the pyramid scheme in a time when the world was a different place.
4. In the end, this strike is not about DVD and digital royalties. Ultimately, this strike is about the massive and traumatic erosion of privileges afforded the middle-ranking factory workers. But of course, there’s not a damn thing they or their bosses can do to bring those privileges back. The landscape of media is moving away from large studios, to college dorms, downtown lofts, and suburban garages. Like Madison Avenue, Hollywood won’t disappear. But also like Madison Avenue, it’ll never command the cultural vanguard like it once did.
My conclusion? The ice cap is melting, and all we’re seeing here is the penguins deciding to hold a picket line. In news terms, it makes for good theater. But like Hollywood, that’s all it is.
[UPDATE:] Thanks to Andrew Denny for leaving the following comment:
Director Mike Figgis made some similar points (and predicted a collapse of the existing Hollywood model) in a wonderful talk on BBC Radio 3 last month entitled: “Is there too much culture?” [55 minutes long]

Just listened to it. Awesome stuff.