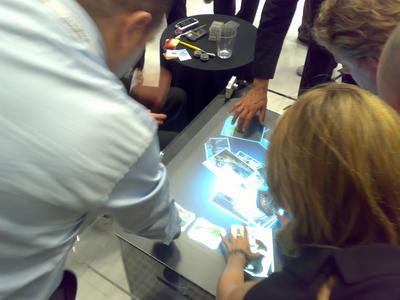 [Microsoft Surface, which I saw last time in Paris.]
In my recent post, I talked about Microsoft’s “next being idea” as thus:

Whatever TV becomes in the next century, Microsoft wants to own it. Or at least, own a huge chunk of it. And that battle will be fought and won [or lost] sometime in the next decade.

Then an anonymous commenter quite rightly pointed out: “Sorry but the real battlefield is mobile phones (compare growth of mobile phones vs. desktop vs. TV and you will see my point)…” To which I replied:

Anonymous, yeah, phones is another big one. Of course, I did say, “Whatever TV becomes”, and you could argue that maybe the TV and the phone will evolve into a third ubiquitous thing.
And then lets not forget other household items- fridges, tables, AC units and the like.

Which explains why seeing the new Microsoft Surfaces table in Paris the other month, when Steve Ballmer made his big announcement about Microsoft entering the ad game on a major scale, got me thinking.
Why did it appear then and there? During that announcement? I knew something was up, but at the time could not find the words for it. Until now.
Here’s what I’m thinking. Though I’m not techie, technology obviously plays big part of my life. Mainly through interfacing with my [1] laptop [a Macbook], [2] my MP3 music player [an iPod], [3] and a telephone [Nokia]. I don’t own a TV, but I could see one day owning [4] Apple TV or an Xbox, i.e. something for the living room. And then when I’m working in an office, there are [5] the company servers; something I know very little about.
So basically, when people like me interact directly with computers, it’s mostly via these 5 main objects. Laptop, iPod, cellphone, the living room entertainment TV thing, and the office servers.
But remember, Microsoft Surface is just in its infancy. Right now it’s just about $30K coffee tables. But give it ten years, it could be something much more cheaper and ubiquitous. Instead, we could be surfing the net not just on TV screens, laptops and hand-held devices, but on cocktail tables in bars. Or the mirror in our dressing room. Or bathroom tiles in the shower. On vacuum cleaners. Or even on the sides of Coke cans.
People my age, when they think of TV, they think of a nice big box in the living room. Some of us are just beginning to think of TV in terms of something we watch on our computers.
But something on the side of a Coke can?
You may intelligently argue the iPod beats the Zune. You may intelligently argue that Gmail beats Outlook Express. You may intelligently argue that Sun’s open source servers run better than Microsoft servers. And you may also intelligently argue that Mcrosoft’s new advertising plan won’t beat out AdSense. Not everybody may agree with, but hey, as long as you can hold your own, nobody’s going to accuse you of being stupid, either.
But let’s see what happens with Surfaces, bathroom tiles and Coke cans, before we consign Microsoft to the dustbin of history. And let’s see what their competitors come up with as well, in the meantime.
Microsoft’s “Software + Services” may not be a big idea for some. “Software + Services + Surfaces + Advertising” is a far more interesting an idea to me.
[YouTube: Jeff Han’s seminal demo at TED, via Chris Lehman.]