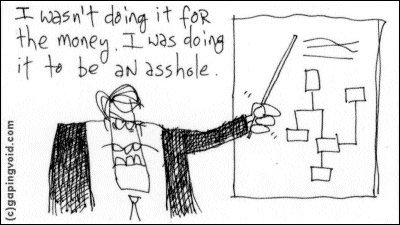 For the last couple of years I’ve been a very minor shareholder in my friend, Sigurd Rinde’s ERP software company, Thingamy.
Not being the ERP business, Sig doesn’t tell me much about what’s going on with Thingamy. Seems to me he has spent the last year or so mainly in his cave, tinkering away.
Then suddenly I’m noticing a whoosh of thought-provoking activity in the blogosphere.
1. First, Sigurd posts about the difference between ERP [ he calls it, “Easily Repeatable Processes”] and what he calls BRP [“Barely Repeatable Processes”}:

I. The Easily Repeatable Process (ERP for me)
Processes that handles resources, from human (hiring, firing, payroll and more) to parts and products through supply chains, distribution and production. The IT systems go under catchy names like ERP, SCM, PLM, SRM, CRM and the biggest players are as we know SAP and Oracle plus a long roster of smaller firms.
[…]
II. The Barely Repeatable Process (BRP)
Typically exceptions to the ERPs, anything that involves people in non-rigid flows through education, health, support, government, consulting or the daily unplanned issues that happens in every organisation. The activities that employees spend most of their time on every day. Processes that often starts with an e-mail or a call. A process volume, measured by time and resource spent at organisations, probably larger than for the Easily Repeatable Processes.

2. Then I notice our mutual friend, James Governor picking up on it:

According to Sig, ERP actually stands for Easily Repeatable Process: “Processes that handle resources, from human (hiring, firing, payroll and more) to parts and products through supply chains, distribution and production. Known to be rigid, but handle events and transactions with precision and in volume. Systems deliver value through extensive reports and full control over resources. Resource oriented, transactional, event driven systems. Delivered by system vendors with roots in accounting using up to 25 year old technological solutions.” But Sigurde is far more interested in the Barely Repeatable Process (BRP): “Typically exceptions to the ERPs, anything that involves people in non-rigid flows [like] the daily unplanned issues that happen in every organisation. The activities that employees spend most of their time on every day. Processes that often start with an e-mail or a call.

3. Then it seems the former Editor of Harvard Business Review, Nick Carr has picked up on it, as well:

Governor quotes Doug Merritt, a guy from SAP who apparently has been up in the alps with Sig recently: “I don’t worry about IBM and Oracle. I worry about Google, Amazon, and Facebook.” Then again, Merritt says, “the ‘consumer’ companies haven’t fully realised the change that’s upon us yet.” Bingo twice over. You need the BRP for the people and you need the ERP for the institution – and you need them tied together in a seamless web-wise bundle with a pretty ribbon that doesn’t scream “software!” at you. Governor thinks the twain shall meet in SAP’s upcoming offerings. “SAP delivering 37Signals ad-hoc collaboration with real enterprise process data and objects is sexy,” he says: “‘Wow. We only just hooked up – and you’re going to let me see your … purchase order …’”

So what’s going on? Is there some kind of new paradigm I don’t know about? Is BRP the future of whatever? Is SAP trying to long-term outflank of Microsoft and Oracle? I have no idea. Sig won’t tell me one way or the other, mainly because of the relatively high volume of readers I get on my blog, as he simply doesn’t want too many people finding out too much about Thingamy too quickly.
But I do know, from reading his blog, that he’s been up to see the boys at SAP a few times this year, with flights and hotels paid for by them.
My guess is that Sig is in talks with SAP about acquiring Thingamy, or at least, having talks about having talks. My guess is that some people within SAP sees some kind of unrealized future in BRM. I look forward to Sigurd giving us the skinny.
[Afterthought:] Whilst we were talking about my involvement with Microsoft, Sig said to me, “Everybody misunderstands Microsoft because they think they’re in the Consumer software business. They’re not. They’re in the Enterprise business.” Food for thought etc.