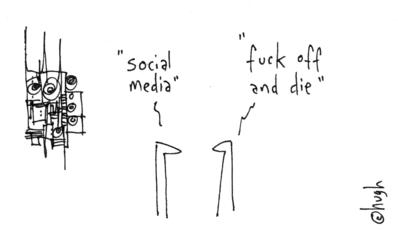 [“Social Media”. Drew it about 20 minutes ago. Inspired the post below etc.]
So what’s stopping Facebook from putting in a small, tickable box that says, “Please do not let my ‘Friends’ send me any more of these REALLY ANNOYING Vampire/Zombie/Super wall/Super Poke/Whatever invites. I really, really don’t want them etc…”?
Heck, it would probably take one of their junior coders only a few minutes to do. What’s the problem?
I’m starting to suspect the short answer is, they WANT you to spend hour after hour after hour every month on their pages, deleting the crap. Makes the numbers look better for their bean counters:
“Yes, Mr Investor, people are spending on average 4 hours a day on our site. Can we have your vast pots of money now?”
But when in fact, 3 hours and forty five minutes of said 4 hours is spent deleting Zombie invites and their ilk, you start getting the feeling that somebody in Silicon Valley is taking somebody else for for a little ride.
I’m not saying this is what Facebook is doing. I’m saying this is what it’s starting to feel like to me, more and more.
Don’t get me wrong, I generally like Facebook and have found it mostly useful. I’ve even met their CEO, Mark Zuckerberg once before and liked the guy.
That being said, if they want to fix the problem, they can easily do so. If they do not, they’re sadly just consigning themselves to the slushpile of history.
[“HUGH’S THIRD LAW”: If you p*ss in the soup for long enough, eventually it stops tasing like soup.”]
[UPDATE:] Oh, Happy Day. Looks like Facebook now lets you ban annoying apps on the latter’s Facebook homepages. Look for the link at the bottom right hand corner. Rock on.