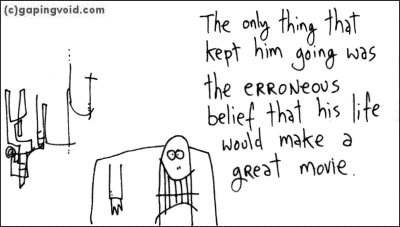 After I found myself permanently exiled from the advertising business in late 2004, I found myself with only a single, unpaid gig remaining i.e. this website, gapingvoid.
Luckily this unemployed phase didn’t last long. Sure, I had a month or two of being poor and desperate, but then English Cut came along, then Thingamy, then Stormhoek, then the consulting, then the Blue Monster, then the paid speaking gigs. Within two years or so I had turned the ship around quite nicely.
But somehow gapingvoid got lost in the mix. Even though the plan has always been to keep gapingvoid at the very epicenter of what I do, in the last 18 months or so it seemed to get increasingly pushed to the margins.
I guess that’s not surprising. With so much going on it’s hard to make a small cartoon blog [with equally small advertising revenues] the main focus of one’s business.
But of course, without gapingvoid, my own personal global microbrand, the other stuff would never have been possible. Therein lies the rub.
The last three years has been without question the most exciting period of my career, but My God, it has stretched me thin. I’m worn out.
So this last week I’ve been telling people I work with, I’m changing the game plan. I’m going back to basics. From now on building “the gapingvoid brand” will become my first priority. Yes, I will still be working with the same people and projects I’m working with now, in much the same way, but in a much less involved capacity.
Time to regroup. Indeed.
I’m thinking now would be a good time to thank everybody who reads gapingvoid on a regular basis. Without you, the last three amazing years would never have happened.
Thanks, Everybody. You guys rock.