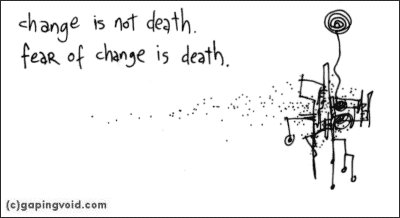 It’s been just over two years since I wrote “The Global Microbrand Rant”:

There are thousands of reasons why people write blogs. But it seems to me the biggest reason that drives the bloggers I read the most is, we’re all looking for our own personal global microbrand. That is the prize. That is the ticket off the treadmill. And I don’t think it’s a bad one to aim for.

It was yesterday’s post, “MicroMarketing on MicroMedia” that got me thinking about the GMB again. Here are some more random thoughts, some more original than others:
1. The good news about blogs is that they’re very powerful. The bad news is that they’re very time consuming. So no wonder in the last two years we’ve seen so many other kinds of “Cheap, Easy, Global Media” spring up- Twitter, Facebook, YouTube etc etc.
2. I will be frequently quoting this line from Clay Shirky until the day I die: “So forget about blogs and bloggers and blogging and focus on this — the cost and difficulty of publishing absolutely anything, by anyone, into a global medium, just got a whole lot lower. And the effects of that increased pool of potential producers is going to be vast.” I’ve been promising myself to write Clay for a while, asking him to elaborate on “Vast”. I have a few ideas. You?
3. Blogs may not be around in ten years. Facebook may not be around in 10 years. What WILL be around, however, is the aforementioned “Cheap, Easy, Global Media”. The latter is never going away, save for a nuclear holocaust. Whoever said “Blogs are just a fad” back in the early days was missing the point. It was NEVER about blogs. It was about something far more “vast”.
4. Beware on becoming a “VaporGuru”. This is the term I use for people who don’t seem to do very much except write in their blogs and speak at conferences [i.e. People like me. Exactly!]. Not that what they have to say isn’t always useful, it’s just that it’s a very crowded market. Secondly, their perspective often tends to be that of an observer, not that of somebody who has actually gone ahead and “actually done it”. Which is why I stick so doggedly to the wine trade. No matter what they may say about me on Techmeme, people are always going to want to uncork a bottle.
5. We’re still waiting for the Blogging Messiah. And we always will be. Doc Searls came pretty close a couple of times, though.
6. Again, I’ll say it one more time: Blogging is just the tip of the Cluetrain iceberg. And it wasn’t the tip that sunk the Titanic.
7. Type “GlobalMicrobrand.com” into your browser and see where it takes you.
8. I consider The Blue Monster a Global Microbrand. One that has been adopted [but not assimilated *cough*] by a Global Macrobrand i.e. Microsoft. Both feed the other. Cultural Symbiosis. Rock on.
9. In retrospect, over time I haven’t written enough about the GMB as perhaps I should have. Probably because, like I said in my original post, none of it is rocket science. It’s really just a case of just doing it. The only other advice I can offer is, keep reading the blogs that you admire and learn from them.
10. I plan to be thinking more about The Global Microbrand schtick for the next wee while, and hopefully writing more on the subject. If you have any thoughts or links you think could help me out, please feel free to send them my way. Thanks.
11. [Saving the best for last:] The question isn’t, “How do you turn your blog into a viable business model?” The question is, “How do you turn a viable business model into your blog?”
[Update: Dr. Mani, a Children’s Heart Surgeon, muses about The Global Microbrand. Nice to see when folk with “real jobs” also start thinking about this stuff, as opposed to the usual suspects etc.]
[Update:] Just got an e-mail from Terry Rock:

I think this is why you haven’t talked much about the Global Microbrand: [See
the 10th slide: Make Sandwiches [don’t just take orders]].
Since I saw Merlin’s presentation online, that’s been the mantra in our
micro-organization: stop taking orders and start making sandwiches.
You don’t build a global microbrand talking about building a global
microbrand.
Terry T. Rock, PhD
President & CEO
Calgary Arts Development

I added the emphasis on his last sentence.