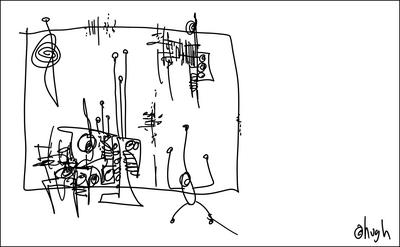 I’m writing this from my hotel room in Barcelona. I’m not planning to go out tonight, but if anyone is in the neighborhood and fancies hooking up, I can meet in the bar downstairs for a beer. My cellphone doesn’t seem to want to work in Spain, so call the hotel at the number below.

I haven’t gotten any sightseeing done. Hopefully tomorrow. The blog panel this afternoon went fine. Thanks to Eileen Brown for inviting me to be on it. I spent part of the day wondering around the convention center, trying to get my head around THE. BEAST. THAT. IS. MICROSOFT. Some notes:
1. The number of people on the Microsoft payroll is the same size as SEVEN Roman Legions [The Romans had about 25-30 Legions at the peak of their power]. And they spend their time arranging long lines of one’s and zero’s into clever little lines, and getting paid for it. Somehow they manage to make it happen.
2. A young Microsoft employee I was talking to said an interesting thing to me. We were talking about this big cultural change that is going on inside Microsoft. He said a lot of it is generational. The old guard is highly competitive, the new guard is more collaborative. The old guard sees Open Source as a threat, the new guard sees Open Source as an opportunity. He was confident the new guard will prevail because, of course, being young, they’ll be around for much longer. He reckoned it’ll be at least another decade before the outside world starts recognizing the change that’s currently happening internally. Interesting.
3. I must have repeated the following story at least a dozen times in the last twenty four hours: The inspiration for the Blue Monster came from a conversation I had late last year, with Steve Clayton. Steve told me that, like a lot of other Microsoft employees, he could be making a lot more money and taking a lot less grief from the general public, if he was working somewhere else. But he chooses to work for Microsoft anyway. Why? Because he gets to play with the cool new toys. He gets to work on stuff that will “change the world”. And as I continue to find out whenever I meet someone who works for Microsoft, this is a commonly held belief inside the company. From a marketing perspective, this a far more compelling storyline than “Your Potential, Our Passion” or whatever.
4. When I first checked into the hotel last night, afterwards I stepped outside the hotel to go smoke a cigarette. There I randomly met a group of American Microsoft employees. We chatted for a bit, then I told them who I was. Two of them immediately took off their jackets to show me the Blue Monster t-shirts they were wearing. Small world, indeed. Apparently somebody at the conference made a whole batch of them to give away as schwag, but they went fast. They ran out in only a couple of hours. I’d love to get my hands on one of them before I leave, but I’m not too optimistic.
5. On blogging for the company you work for: Somebody in the audience today asked me what they should do if their boss doesn’t like the idea of them blogging. I replied that if you have something interesting to say about your product, and still your boss won’t let you blog, my guess is that he’s probably an idiot, and you should quit your job and go work for somebody else.
6. I firmly believe that the general perceptions of Microsoft will be very different in twenty years’ time than what they are today, and for the better. And I also believe that, when the textbook writers eventually get around to writing the story of how this change happened, Microsoft blogs and bloggers will be at the very center of the story. It is this belief that made Microsoft interesting to me in the first place, and continues to do so to this day.
[Update- Friday Night:] Back in London. Arrived safely home etc.