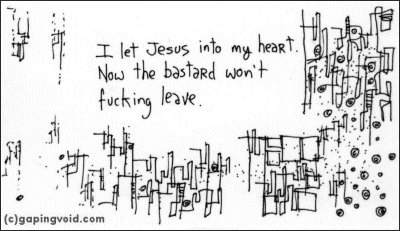 Eric Karjaluoto has an excellent post on what he would do, if he were given the task of re-branding Microsoft:

I’d ask the team at Microsoft to ask some blunt questions about who they really are. I don’t mean the bullshit “mission statement” responses here either; I’m talking brutal honesty. From a peripheral standpoint, my nutshell response to this situation would be something like, “We’re the most powerful computing force on the planet, and we’re acting like a bunch of sissies.”

I find two lines in the last paragraph very telling:

Of course, none of this is going to happen. Microsoft is still a behemoth, and it’s not as though they are asking for my opinion.

And here, of course, is an opportunity for Microsoft to prove Eric wrong. Let’s see if anyone inside Redmond sends him an e-mail. This for me goes back to what JP Rangaswami said a wee while ago:

People want Microsoft to change. That is the essence of what made the Blue Monster such a hit, it was a way of people outside Microsoft telling people in Microsoft of the intense need for change…

The more I get to know Microsoft, the truer this seems to be, both inside and outside the company.
[Thanks to Leah for the pointer.]

You might want to fix the mailto: link if you truly want anyone to email him..

Razi, I truly don’t want to send him an army of spambots, either 😉

I am truly offended for the first time by your scrippled curse at Jesus.
It’s not funny and I don’t get it, sorta like I don’t get what you granola heads are trying to do with a software company called microsoft.
It’s not a social movement, it’s a company. DUH. The more “movement, and causes” you throw at microsoft, the more you look like a bunch of losers.
Why don’t you get to working on something brilliant and then microsoft may notice you, until then you are just wasting your granola head braincells on nothing.

I wonder, is there a name for liking/loving a company enough that when they screw up, instead of going somewhere else, you BEG them to change. Kind of screws up the basic premise of capitalism,no? Not criticizing it, though, I certainly do it a lot too, but I wasn’t sure if there’s a word for it. I think ‘brand loyalty’ doesn’t apply here.
BTW, ‘granola head’??

“Now the bastard won’t fucking leave.”
Plus he’s demanding 10% of my salary.

Lisa may be on to something. I like granola. I like the cartoon. Clearly, Lisa’s cracked the Jesus-hating code… 😉
++++
For what it’s worth Lisa, here’s a link to purchase some of my favorite granola: http://www.amazon.com/Natures-Path-Organic-Granola-11-5-Ounce/dp/B000FBL8GO
enjoy.

I’m an MS FTE.
Lisa, I’m sure you are a very bright person, but in some respects you are representative of the corporate inertia that has outlasted its usefulness.
MS makes great products and offers truly great vision and solutions. If I didn’t believe that, I’d be gone.
What Hugh and others (and I dare to put myself in that category) are TRYING to do is change the way that Microsoft relates to its customers, because
1. the customer expectations have changed so dramatically
2. the means for communication with (not TO!!) them has changed
3. and our opportunities for building a foundation for the next 30 years are so great, but we need to do the heavy liftin now.
Right now, much of our direction is due to momentum from previous successes. That runs out eventually.
Status quo is easier…in the short-term. Hugh’s a visionary and sometimes that makes you unpopular w/the defenders of the status quo.

A story…
I once applied to Microsoft (I had worked there previously as a coop). I used my most accessible email address in my application – a gmail address. My Director-level contact, who was prepared to put in a good word, asked me to switch the email. I asked if it wasn’t more important for the interviewer to inquire “why” I used gmail (marketing? luck? benefit?)?
My contact told me (in not-so-many words) I was too cocky, too self-absorbed and he probably wouldn’t be making that recommendation anymore. I told my contact, “If I didn’t truly care about helping your organization, I would have obliged, and changed my email. But I do care… a lot”.
We haven’t spoken since. But I have.

Andrew,
Sounds like your contact was a typical company butt kissing bureaucrat. To paraphrase P.T. Barnum, there’s a cocksucker born every minute.