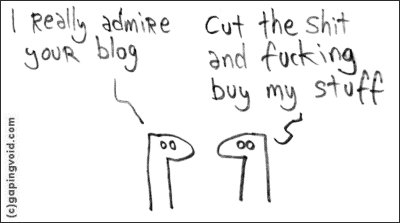 My father e-mailed me this story from the Wall Street Journal. Scott Adams, the creator of the highly successful cartoon, Dilbert, writes about giving stuff for free on the net. It seems he’s had mixed results.

A few years ago I tried an experiment where I put the entire text of my book, “God’s Debris,” on the Internet for free, after sales of the hard copy and its sequel, “The Religion War” slowed. My hope was that the people who liked the free e-book would buy the sequel. According to my fan mail, people loved the free book. I know they loved it because they emailed to ask when the sequel would also be available for free. For readers of my non-Dilbert books, I inadvertently set the market value for my work at zero. Oops.
So I’ve been watching with great interest as the band “Radiohead” pursues its experiment with pay-what-you-want downloads on the Internet. In the near term, the goodwill has inspired lots of people to pay. But I suspect many of them are placing a bet that paying a few bucks now will inspire all of their favorite bands to offer similar deals. That’s when the market value of music will approach zero.
That’s my guess. Free is more complicated than you’d think.

If I have noticed one thing to happen in the world of work these last twenty years, it is the massive blurring of the lines that separate work you get paid for, and work you do for free. These days, it’s not uncommon to meet people who work 30-50% of the time for free, especially among the bloggers.